TPP and U.S. dairy policy: fewer farms and raw milk down the sewers 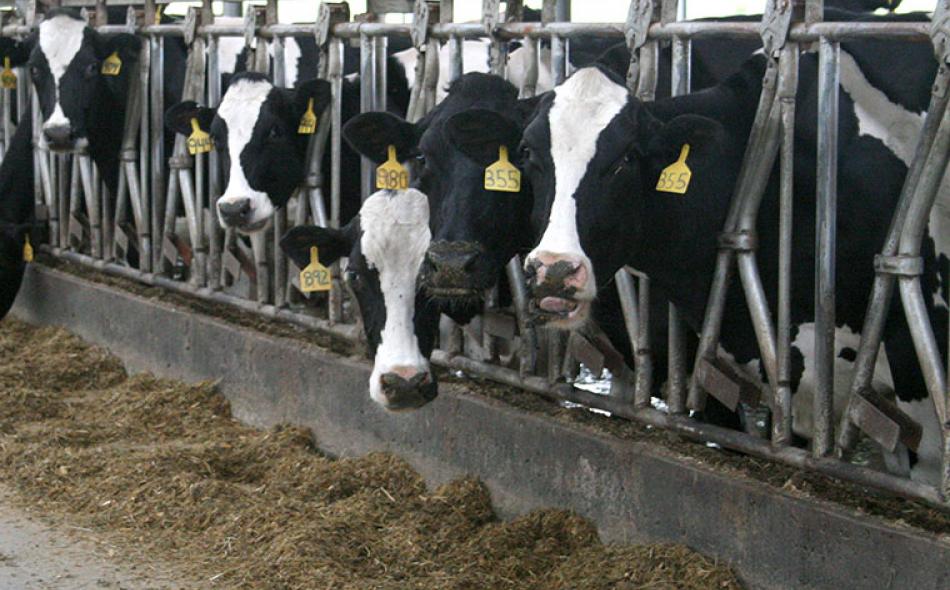 Regardless of their operation, do all farmers benefit when they sell their production to traders and processors who export crop- and livestock-derived products? According to a recent interview with Ambassador Darci Vetter, the chief U.S. agricultural trade negotiator, the answer is unequivocally yes. Even now, when prices paid to farmers and ranchers by those traders and processors are well below the cost of producing those crops and livestock, according to the U.S. Department of Agriculture (USDA)? Consider the case of dairy farmers.

IATP contends that the dairy import provisions of the Trans-Pacific Partnership Agreement (TPP) will do nothing to stem the global raw milk price collapse that is driving U.S. dairy farmers out of business.  Those low prices provide very cheap raw materials to such mega-dairy processors as Kraft Foods, Dean Foods and Land O’Lakes, which is owned by the mega-cooperative, the Dairy Farmers of America, but the benefits to farmers are vanishingly small.

How can farmers remain in business if prices paid for their raw materials in most years are below the cost of production? They often don’t, as the loss of half of all dairy farms since 2000 attest. With raw milk prices decreasing by 55 percent since 2014 and U.S. dairy processors pouring tens of millions of gallons of raw milk down hi-tech sewers, increased imports under the TPP of ultra-heat treated milk, low-protein milk protein concentrate and casein (a starch used in multiple dairy products) would accelerate dairy farm loss. Current U.S. dairy policy combined with TPP import measures would further favor global dairy processors, at the expense of most U.S. dairy farmers.

The 2014 Farm Bill introduced the most radical dairy policy changes in 70 years, according to a North Dakota State University economist, on the basis of counter-factual econometric projections of high dairy prices through 2018. Chief among these changes was the introduction of a one size fits all dairy operations “margin insurance” program to which dairy farmers would pay into voluntarily. The “margin” in the Dairy Margin Protection Program (DMPP) is the difference between the price of milk and the average cost of dairy cattle feed components, corn, soy and alfalfa (hay). Regionally affected dairy herd size, feeding practices and raw milk transportation costs no longer matter under the DMPP, to say nothing of other costs of raw milk production.

Farmers would be “insured” against losses under this peculiar definition of “margin” (conventionally, the difference between revenue and all costs of production), according to how much they paid into the program. Confined Animal Feed Operations (CAFOs) would be on the proverbial level playing field with small-herd dairy operators because everybody would receive as much in margin insurance payments as they could afford to buy.

According to the trade journal Farmshine, USDA had collected $73 million in margin insurance payments but distributed only $700,000 in indemnities until August 4, when it distributed $11.2 million to 4,258 dairy operations, about 10 percent of those remaining. According to an August blog by Food and Power, Senator Kirsten Gillibrand (D-NY) wrote to USDA Secretary Tom Vilsack to protest the USDA’s failure to make DMPP payments. However, given the USDA’s DMPP formula and the collapse of raw milk prices and of the corn and soy prices that comprise the lion’s share of feed prices for non-grass fed dairy cattle, there is little margin loss for the USDA to compensate.

By excluding the cost of the dairy farmworker labor from the definition of dairy “margin,” on which CAFOs depend, the DMPP tips the playing field further in favor of the CAFOs. They have the economies of scale to weather low raw milk prices, provided that corn and soy for dairy feed remain below the cost of production.  Not surprisingly, the Dairy Farmers of America (DFA) and other dairy organizations with CAFO members supported the DMPP, as well TPP dairy provisions. If the DMPP payouts continue to be meager and raw milk prices remain low, what will change the grim outlook for farmers?

The Farm Bill alternative to the failure of the DMPP to protect the surviving dairy farmer margins is an ad hoc, short-term supply management solution one ironically consistent with Canada’s successful supply management schemes, which is under siege in the TPP. Representative Collin Peterson of Minnesota, a top recipient of DFA electoral contributions and praise, announced his thanks on August 23 to the USDA for purchasing surplus cheese stocks for distribution to food banks to relieve the supply pressure that is assumed to be the sole cause of rock bottom raw milk prices. Representative Peterson also thanked the USDA for extending the deadline three months for farmers to enroll in the DMPP, in response to his request and that of other congressional agriculture leaders. But the leaders propose no change to the DMPP margin calculation nor a proposal for congressional hearings for long-term solutions to the dairy price crisis.

The Dairy Export Council anticipates a raw milk price rebound in 2017, if only Russian and Chinese raw milk import demand increases. However, according to IATP’s 2014 report, “China’s Dairy Dilemma,” the price rebound, if it happens, is unlikely to be rapid because the industrialization of Chinese dairy production is even more ruthless than its U.S. counterpart in driving down raw milk prices and driving small-scale dairy farmers out of business. Russia is investing in its dairy industry as well. Its embargo of Western agricultural products is unlikely to end until and unless there is a geo-political détente that recognizes Russia’s sphere of influence in controlling natural resources and military superiority in the Ukraine and the Black Sea.

Let’s consider other possible causes for below total cost of production U.S. raw milk prices. DFA paid a $156.8 million fine in 2013 for dairy price fixing over several years in 14 U.S. Southwestern states, while “admitting to no wrong-doing.” As part of the settlement with the court, DFA agreed to take steps to allow the price of raw milk to increase. Notwithstanding DFA’s claim of innocence, in 2014, an anti-trust lawsuit was reinstated against DFA and Dean Foods for “conspiracy not to compete” in buying raw milk in Southeastern states. In 2014, DFA agreed to pay a $46 million fine for manipulating the price of cheese on the Chicago Mercantile Exchange (CME) with “no admission of wrong-doing.” Price movements in the CME Cheese market help determine the price offered for raw milk. In 2014, DFA agreed to pay a $50 million fine for driving down the price of raw milk for Northeastern dairy farmers, all the while protesting its innocence. Dean Foods agreed to pay a $30 million fine in a related case.

For DFA—a corporation legally organized as a cooperative which reported $13.8 billion sales in 2015—these fines, which have resulted from class action lawsuits and not USDA or Department of Justice action, are just the cost of doing business. The Department of Justice published a 24-page report in 2012 on its 2010 agribusiness anti-trust hearings, which resulted in 18,000 public comments. However, the report had little to say about specific anti-trust or anticompetitive merger or business practice cases.

Current U.S. agriculture, trade and anti-trust policy harms, or at best is indifferent, to the needs of small herd dairy farmers. Nevertheless, with both polling results and the U.S. presidential candidates against the TPP, President Obama is not relying on the post-electoral economic self-interest of lame ducks (members of Congress who will be defeated in the November elections or who are not seeking re-election) to lock in approval of the TPP. A New York Times photoshows the President meeting with former and present State Department and Defense Department officials, who will argue passing the TPP is a national security bulwark against Chinese military aggression and global economic control. Clyde Prestowitz, a former Reagan and Clinton administration official has outlined in an August 23 opinion piece the futility of using TPP rules to try to contain Chinese economic and geo-political influence. According to Prestowitz, China has a $4 trillion fund it is investing, while U.S. headquartered corporations have parked $2.2 trillion in offshore tax evasion havens awaiting the next tax evasion amnesty before they consider investing.

U.S. farmers doubt that the $43 billion acquisition of the biotech seed and pesticide giant Syngenta by the China state owned pesticide colossus ChemChina will benefit farmers. Instead they worry that further market share consolidation will mean higher seed and agricultural chemical prices and less choice about what inputs to buy.  The inter-agency Committee on Foreign Investment in the United States had no national (food) security qualms about greenlighting the Chinese purchase of Syngenta in mid-August, nor the Chinese acquisition of Smithfield, the largest U.S. pork producer, for a mere $7.1 billion. As Alan Guebert noted in a prescient column, the U.S. agribusiness claim that U.S. farmers ‘feed the world’ with their exports rings hollow as the Chinese and other foreign corporations buy up the U.S. means of agricultural production.

Congressional approval of the TPP will not strengthen U.S. national security nor will it help U.S. dairy farmers. U.S. agribusiness executives, Wall Street investment banks that advise the Chinese, biotech seed companies and their patents lawyers will become yet wealthier as the Chinese state buys up U.S. agricultural assets. The Communist Party’s 13th Five Year Plan has promised active promotion of pesticide dependent GMOs, which the ChemChina acquisition of Syngenta will enable. But U.S. farmers, rural communities and natural resources will continue to be ravaged by an agricultural investment and weak regulation model that the TPP would codify.