In late 2018, the bipartisan Energy Innovation and Carbon Dividend Act was introduced in both the House and Senate. This carbon tax would charge fossil fuel companies (oil, gas and coal) for their carbon dioxide (CO2) emissions, starting at $15 per ton of CO2 upon passage and increasing by $10 each year afterward. Profits would go to taxpayers in equal shares as a dividend. This dividend would ostensibly offset any increase in residential energy costs.

Lawmakers on both sides of the aisle, especially in states impacted by climate the most, are increasingly calling for climate action. The bipartisan proposal had five co-sponsors in the House: Brian Fitzpatrick (R-PA), Tom Rooney (R-FL), Ted Deutch (D-FL), John Delaney (D-MD) and Charlie Crist (D-FL). In the Senate, Jeff Flake (R-AZ) and Chris Coons (D-DE) were co-sponsors. It is the first bipartisan climate legislation to be introduced in a decade.

The House and Senate bills were both introduced within weeks of two climate reports—one from the Trump administrationand one by the United Nations—warning of the devastating impacts of climate change, particularly for farmers and rural residents. No state will feel these impacts more than Florida, which three of the House bill’s co-sponsors represent. Florida is already experiencing damaging sea level rise and intensifying storm systems.

Supporters say the carbon tax would reduce greenhouse gas emissions by 40 percent in 10 years and by 91 percent by 2050. In addition, proponents claim the bill would create 2.1 million new jobs by its tenth year and prevent 13,000 pollution related deaths annually.

But does this all add up?

IATP has long criticized market-based mechanisms as an inadequate solution to climate change. This is, in part, because carbon markets and taxes have not placed a high enough price on carbon to incentivize meaningful greenhouse gas reductions. A report by the Carbon Pricing Leadership Coalition concluded that to achieve emissions reductions in line with the Paris Climate Accord’s goals, carbon must be priced between $40-$80 per ton by 2020 and $50-$100 per ton by 2030. At a starting price of $15 per ton of CO2, the Energy Innovation and Carbon Dividend Act does not go far enough.

A carbon tax can be an effective climate policy when part of a larger suite of solutions. However, the House bill prohibits the federal government from regulating greenhouse gas emissions on the basis of climate change from the taxed sectors for 10 years. If emission targets are not being met after 10 years, regulatory authority would be restored. This provision was included primarily to gain Republican support, in response to heavy lobbying from the fossil fuel industry. But with a carbon price too low to drive emissions reductions on its own, additional regulation will be necessary. 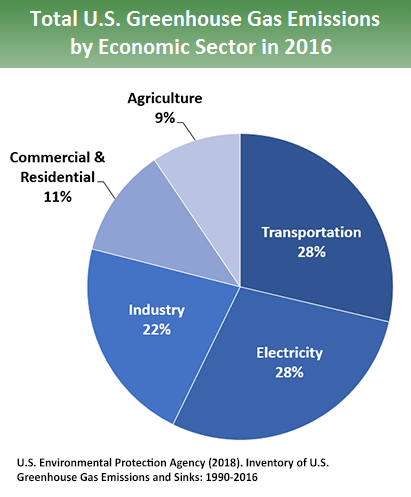 Furthermore, the bill only puts a fee on fossil fuels, and does not explicitly address other sectors that massively contribute to climate change. Again, a carbon tax can be part of a climate solution, but unless paired with strong vehicle efficiency standards, good agricultural policy and more, we won’t meet our greenhouse gas emissions reduction goals. Given the Trump administration’s 2018 proposal to reverse the Obama-era fuel efficiency standards for cars, and the 2018 Farm Bill that does little to address climate change, the new carbon tax proposals will come up short.

Agriculture exemptions in the bill make it even more explicit that this climate policy will not reduce greenhouse gas emissions from agriculture. The bill states that if any covered fuel is used on a farm for an agricultural purpose, the farmer will be paid the total amount of carbon fees previously paid on that fuel. Furthermore, the carbon tax “shall not be levied upon non-fossil fuel greenhouse gas emissions which occur on a farm.” This exemption excuses one of the largest greenhouse gas emitting sectors from the tax, essentially allowing the energy-intensive industrial system of agricultural production to continue unabated and without resources for farmers to transition toward lower emitting, and potentially carbon sequestering, practices.

The bill also includes a border carbon fee adjustment, so imported carbon products would be hit with a tariff. Through the border adjustment, foreign competitors are effectively taxed at a similar rate, which reduces the chances of U.S. companies offshoring to escape the carbon tax. This is not as simple as it sounds, however. Existing international rules make it difficult, and in some cases illegal, to selectively tax products. The bill is designed for World Trade Organization (WTO) compliance but could run into trouble with the “New NAFTA” (United States-Mexico-Canada Agreement, or USMCA). This trade agreement goes further than the WTO to reduce tariffs, and completely ignores climate considerations in its text.

Furthermore, it’s difficult to track the carbon intensity of products produced abroad. The bill addresses some of these issues by only applying the tax to products that exceed a certain threshold of carbon intensity and by treating each trading partner differently depending on their own mechanisms to internalize the cost of carbon. Still, the border carbon adjustment will be tricky to navigate and implement.

Across North America, there are multiple carbon taxes and cap-and-trade systems already in place. Fourteen states and Canadian provinces, plus one U.S. city, have carbon pricing schemes, with seven more states and provinces in active pursuit. While some carbon pricing schemes deal with just the power sector, others also cover transportation, buildings and industry. Within these existing models, carbon prices have not been high enough to meaningfully reduce greenhouse gas emissions. Any federal proposal should learn from these existing models and set a higher price on carbon.

With Democrats taking control of the House and increasing bipartisan support for climate action, it’s possible that a federal carbon tax could pass into law. Climate action is also supported by a new Congressional committee to examine climate change—the Select Committee on the Climate Crisis, led by Rep. Kathy Castor (D-FL). In addition, the Green New Deal is garnering significant attention, and would boldly reduce emissions through massive infrastructure investments that support renewable energy and a fair economy. The growing discussion around climate change in Congress is encouraging, but lawmakers must be bold enough to introduce measures that will rise to the challenges we are facing.