Filling the Local Foods Gap in the Farm Bill 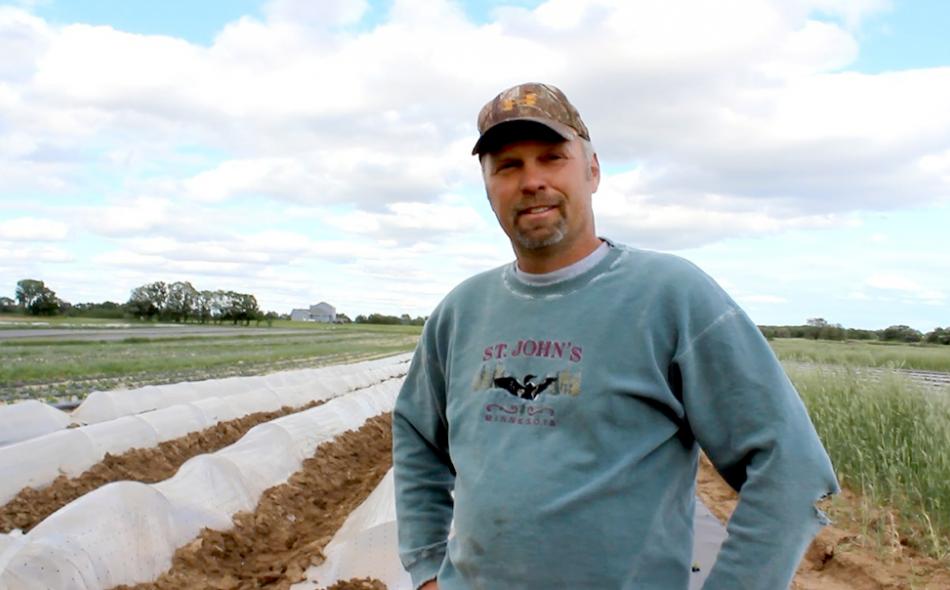 John Svihel, a Minnesota farmer who has sold produce to local Farm to School programs, in front of his cantaloupe field

When we started our partnership with St. Cloud’s Reach Up Head Start program, Nutrition Services Coordinator Haley Anderson knew she wanted to source locally produced food for her kids–she just wasn’t sure how to do it. Building in nutrition education for kids and families was a straightforward process. Class curriculums have been modeled and tested and she could schedule trainings for her staff on activity materials. Even after Haley had connected with local farmers and was ready to purchase their food, figuring out how the food would get from their farms to her kids’ plates was a complicated process. “We wanted to support our local farmers in central Minnesota but our current distributors had a different definition of ‘local,’” Haley remembers. Their orders weren’t large enough for the farmer to do a delivery, and there weren’t affordable delivery options that could be dropped off on site.

The first year of their Farm to Head Start program, Haley committed to driving to the farms herself, picking up boxes of produce before she headed into the office. She loved the opportunity to build relationships with farmers, but she knew this wasn’t sustainable. Luckily, in her second year, Haley connected with the Local Harvest Food Hub, which aggregates and delivers produce from many local farms to locations throughout West Central Region of Minnesota. Local food distributor Bix now provides weekly lists of what local products from Central Minnesota are available.

Unfortunately, many institutions don’t have access to these distribution solutions. There continue to be major stumbling blocks to expanding our local and regional food systems – the return often isn’t high enough for local farmers, while the transportation and processing infrastructure for local food production isn’t well developed. A new bill in Congress, aimed at shaping the 2018 Farm Bill, attempts to address some of these obstacles by increasing investments in local food infrastructure, helping farmers reach new local markets, and expanding access to local food for low-income communities. The Local Food and Regional Market Supply Act (The Local FARMS Act) was introduced this week by Sherrod Brown (D-OH) in the Senate, and Representatives Chellie Pingree (D-ME), Jeff Fortenberry (R-NE) and Sean Maloney (D-NY) in the House.

Efforts to meet rising consumer demand for locally produced food can be found nearly everywhere. From schools to hospitals and universities, to grocery stores and restaurants, locally produced food is infiltrating the marketplace. This summer, the St. Louis Fed, the Fed Board of Governors and the U.S. Department of Agriculture published a report tracking the growth and economic benefits of investing in local food systems.

In 2015, over 167,000 U.S. farms produced and sold food locally through food hubs and other intermediaries, direct farmer-to-consumer marketing, or direct farm to retail, according to the National Sustainable Agriculture Coalition (IATP is a member). Those sales resulted in $8.7 billion in revenue for local producers. Some 42,000 schools in all 50 states now have Farm to School programs with an estimated an estimated $780 million in value. Surveys find that 75 percent of shoppers bought local food within the last month and 87 percent of shoppers say the availability of local food is important to them.

The Fed report highlights how local and regional food systems strengthen rural-urban linkages and even local business-to-business connections as money re-circulates within the community, rather than being extracted by multinational food companies. Studies have shown that each dollar invested in Farm to School programs stimulate up to an additional $2.16 of local economic activity, sustaining local jobs and supporting local businesses. A 2017 report from the National Farm to School Network analyzing the economic impact of Farm to School activity in the Minneapolis Public Schools showed that “for every additional employee added to the payroll to the Farm to School production sector an additional 7.55 jobs are generated in backward-linked industries in the Minneapolis area.”

Despite this growing demand for local food, farmers and buyers are running into a decades-long push by agribusiness and food companies to create global supply chains that dominate our food system. For example, Minnesota fruit and vegetable farmers struggle to find processors willing to take in smaller batches of produce for local institutions. New food safety standards have been developed with large operations in mind, making it difficult and costly for multi-crop smaller scale farmers to meet these requirements. Financial lenders often see local foods oriented businesses as a higher risk that doesn't meet the “proof of concept” barrier.

The Local FARMS Act would solidify funding for a number of already successful local foods system programs in the Farm Bill. The bill brings together the Farmers Market and Local Food Promotion Program and the Value-Added Producer Grants Program to streamline support for farmers markets, farm to retail marketing, local food infrastructure projects and producer-owned enterprises. It stabilizes money for the Organic Cost Share Certification Program, which assists farmers in transitioning to organic production. The bill helps farmers manage additional costs to meet new food safety rules and regulations, while also provide additional training. The bill would make it easier for schools to procure locally- and regionally-produced food. And it would expand the ability of rural development and farm service agency grants and loan programs to be used to support livestock, dairy and poultry supply chain infrastructure.

Congressional leadership on local foods development is more important than ever. President Trump’s proposed budget earlier this year would have eliminated the Value-Added Producers Grants, a host of rural business and cooperative development programs, and the Farmers Market and Local Foods Promotion Program.

Too many in Congress seem inclined to simply copy and paste from the previous Farm Bill, which has not served farmers, consumers or rural communities well. Our current Farm Bill has contributed to the over-production of commodity crops and now industrial meat production, three straight years of declining farm income, a continued population decline in rural communities and an unhealthy dependence on expanding exports in volatile international markets.

A stronger local and regional food system could spur economic development and help meet rising demand from consumers, retailers and institutions, but it will only be successful if it works for farmers. A new approach to farm policy, like the Local FARMS Act that is grounded in farmer profitability, local business development and meeting consumer demand for locally produced food, should be central to the next Farm Bill. It’s time for Congress to get on board.