Where have all the dead chickens gone? 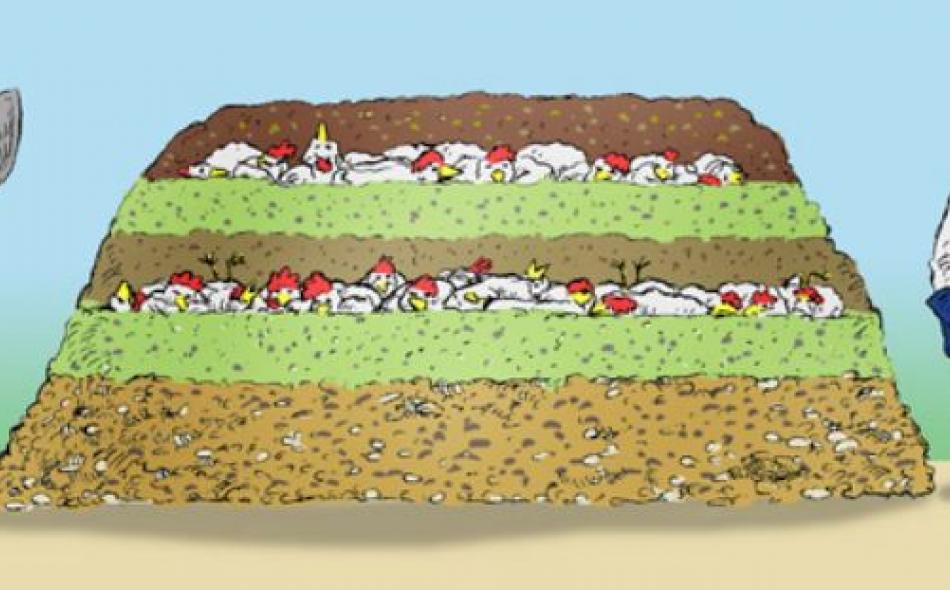 If predictions are correct that another round of avian flu will hit this fall, we need to quickly step back and take a hard look at how last spring’s avian influenza disaster played out.  A question that is getting little attention is what happened to the almost 50 million dead birds and the risks associated with their disposal?

The first reports in December of 2014 didn’t hint at the tsunami of Highly Pathogenic Avian Influenza (HPAI) that was about to come crashing down on the U.S. poultry industry. Backyard flocks in Oregon and Washington set off the alarm bells. On December 19 it was confirmed that a backyard flock in Douglas County, Oregon was infected with HPAI H5N8, a strain of avian flu that was raging through Europe, infecting poultry from Italy to Holland.

The Douglas County flock was incinerated on December 21, 2014. By July 31 of 2015, the USDA reported that close to 48.1 million birds in the US died from the H5N2 strain. Most of the confirmed infections occurred in April and May with Minnesota and Iowa the hardest hit states. After “depopulating” (killing) the infected flocks, there remained the issue of how to dispose of at least 100,000 tons of dead birds without spreading the virus through the air, dust or water.

The USDA’s Animal Plant Health Inspection Service (APHIS) has just launched a review of carcass disposal as it prepares recommendations for the next round of Avian Influenza expected this fall. In July, when Dr. John Clifford of APHIS testified before Congress on the response plans to halt the spread of infection, he said, “Our experience in the Midwest showed that the biggest roadblock to efficient depopulation (which is key to reducing the spread of the virus) is the lack of ready sites to receive and process dead birds.” The startling takeaway message from APHIS is that the poultry industry needs to build into their business model the disposal of millions of birds.

In the past, Avian Influenza outbreaks occurred periodically and affected particular regions of the world, but more recently it has gone global.  According to Food and Chemical News, at the June 2015 conference of the Global Alliance for Research on Avian Disease (GARAD), Professor Ian Brown, director of the EU/FAO/OIE Reference Library for Avian Influenza, stated that avian flu will remain a threat to global food security for many years to come, “Strains of H5 highly pathogenic avian flu have become ‘truly panzootic,’ affecting poultry and wild birds globally," Brown told delegates.

At the first signs of infections, a white feathered curtain descended around the industrial poultry operations. Strict bio-security measures and response plans were put in place. The protocols are designed to stop the spread of the disease, but they did little to protect the more than nine million birds that were lost in Minnesota or birds in 21 other states. In just a few months, three percent of the U.S. annual turkey production and ten percent of its egg-laying population was wiped out.

The USDA and state agencies responsible for protecting livestock health blame migrating wild birds. In Minnesota, an investigation of this theory by the Department of Natural Resources (DNR) failed to find strong evidence to support it. The next culprit accused of spreading the flu was the wind. It is still unclear how the virus entered so many bio-secure facilities, but every effort possible was made to keep the public from seeing the massive carnage that was taking place.

Few images were made public and little to no information on the actual location of the infected flocks was given out. Even today, with some barns already restocking, the Minnesota Board of Animal Health is not allowed to provide information on where the H5N2 outbreaks in Minnesota occurred because “the information is private/non-public pursuant to Minn. Stat. 13.643.subd. 6.” The USDA provided a list of counties across the country with the dates of confirmed infections, depopulation and restocking, but the public is prevented from knowing exactly where these facilities are and where the carcasses were disposed. This effort to keep agricultural information from the public is part of a larger effort to establish “ag gag” laws across the country designed to protect agribusiness against charges of animal cruelty.

The preferred depopulation method by the USDA for on-floor flocks is a water-based foam used by fire departments, which smothers the birds. Minnesota state veterinarian Bill Harmann is looking into the Canadian use of carbon dioxide gas to asphyxiate poultry.  APHIS has proposed another method: shutting off the ventilation system and letting the birds die from their own heat. This is controversial because of the pain it would cause the birds, but Dr. Clifford defends it:

“You can only take out about 100,000-plus birds a day out of one house and carbon dioxide those,” he said, when there are farms with millions of birds that have to be euthanized. “We need to allow all tools to be used in the toolbox.  Any delay in putting birds down puts more virus into the environment.”

After the birds are dead, they’re disposed of by incineration, burial in landfills or composting. While the protocols and response plans are all very specific and detailed, actual experience in the U.S. with HPAI disposal of millions of birds with highly infectious diseases is still relatively new. Both burial in landfills and incineration have the drawback of needing to transport the carcasses off site, with the risk of spreading disease. Landfills, in addition to transportation risks, have the added disadvantage of the possibility of disease and waste leaching into the soil and water. Despite the risks, in this most recent outbreak of H5N2, incineration or burial in landfills were used almost exclusively with egg laying chickens and backyard flocks. Egg laying barns are full of cages and water and waste handling equipment that would have made in barn composting difficult.

Early experiments with composting as a disposal method for AI infected poultry go back as far as 1984, but composting didn’t come into its own until 2002, with broilers in the Del Marva Peninsula. In 2007, a little more than a million pounds of turkey carcasses infected with Low Pathogenic Avian Influenza (LPAI) H5N2 were composted. Composting works best in barns where the birds are kept on the floor and where the dead can be moved with a front end loader into piles and layered with wood chips, creating large rounded windrows where the birds decompose and the heat generated destroys the virus. It is safest to build the compost piles inside the barn to minimize the risk of spreading the disease while moving carcasses out of doors.

After a set period of time with the compost piles heating up, being turned and tested, the final step is to spread the finished compost on fields as fertilizer rich in nitrogen, phosphorus and potassium (N-P-K.)

The task of removing thousands of tons of dead birds is left to the operators of the poultry barns. The federal government has spent $191 million to help with the disposal of poultry carcasses in what is described as indemnification. In mid-April, Dr. Clifford reported that the USDA had already spent $15 million in Minnesota alone. How much of this money goes to poultry barn operators is not clear. In an industry dominated by four major chicken processors (Tyson, Pilgrims, Sanderson and Perdue) the farmers who contract with them are at a distinct disadvantage (note: strong language). Hormel is the turkey processor that owned most of the turkeys that died in Minnesota.

As we face the prospect of millions more birds dying from HPAI we need to ask what is the best way to get rid of all the dead birds. Is spreading thousands of tons of composted diseased birds on open fields safe for animals and humans? What if all the virus isn’t destroyed in the compost piles? What will happen when the disease strikes again? Who is looking out for the health and welfare of the farm operators who have to clean up after the disease? What happens if the virus mutates and crosses the species barrier and infects humans? And the biggest question of all, why are we continuing to raise poultry in a way that creates all this waste, suffering and risk to human health?