High tunnels can bring benefits to farmers and schools 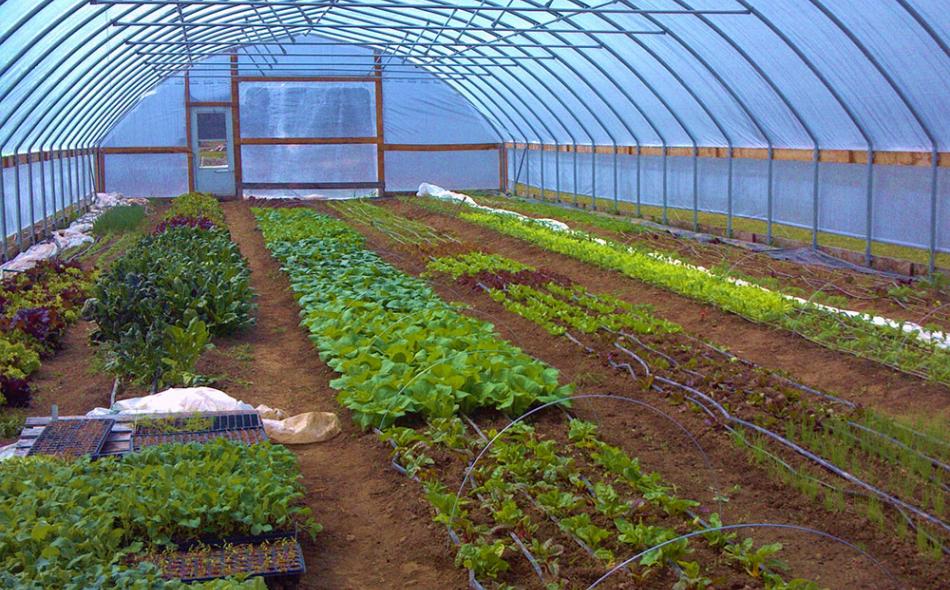 High tunnels—also known as hoop houses or passive solar greenhouses—are an increasingly common feature on farms through the Upper Midwest, where their use provides valuable extension to the region’s short growing season.  Local food markets—including farm to school—stand to benefit from the increased availability of fruits and vegetables throughout the year produced by the increased use of high tunnels. IATP’s new report, Extending the Growing Season:  High Tunnels Use and Farm to School in the Upper Midwest, explores this relationship further. By looking at best practices in high tunnel use and Farm to School activities, the report identifies innovative approaches with the potential for linking the two practices more effectively. Such innovative ideas drive recommendations for more comprehensive support for increased on-farm implementation of high tunnels and for farm to school activities throughout the Upper Midwest.

The release of this report is timely, as critical federal funding and resources for the expansion of high tunnel use in the Upper Midwest and the nation are at risk. President Obama’s budget for fiscal year 2016, which is currently being considered by the House and Senate Budget Committees in their budget resolution processes, carries a request to cut $373 million from the United States Department of Agriculture (USDA) Environmental Quality Incentives Program (EQIP). This program, among other things, helps fund the popular Seasonal High Tunnel Initiative, which provides financial and technical support for farmers interested in implementing or expanding the use of high tunnels on their farm. High tunnels are low-cost and flexible tools that, when integrated and managed successfully, provide farmers with greater control over growing conditions and create an opportunity to increase the length of the growing season for specialty crops.

The Obama Administration’s proposed cut could result in a slowdown on the expansion of high tunnel use on Upper Midwestern farms, which would reduce the amount of early and late season fruits and vegetables available to supply burgeoning local food markets, including farm to school. The growing season of the Upper Midwest is naturally limited – typically lasting from mid-May to early October – and, as the U.S. Environmental Protection Agency notes, increasingly volatile due to climate change, potentially offsetting any gains attributed to anthropogenic warming. Such climatic realities pose challenges for farm to school activities throughout the region. While such activities are increasingly popular options for successfully enhancing student, farmer and community well-being, building alignment between the growing season and the school year is a perennial challenge that is exacerbated by the new climate reality for farmers in Minnesota, Wisconsin and Iowa. The increased use of high tunnels by fruit and vegetable farms offers an opportunity to create better alignment between local farmers and their neighboring schools.

Often, stringent budgetary limitations for K-12 food services can put fruits and vegetables produced in high tunnels out of reach of the cafeteria tray. Such early and late season production is typically geared toward higher margin direct sale markets, such as farmers’ markets and restaurants, which will maximize the return for the farmer and the return on investment for the high tunnel.  While there are instances where seasonal produce is purchased from local farmers by K-12 schools, the primary benefit of high tunnel use is more indirect. Research on the productivity gains provided by high tunnels and the price premium season-extended produce commands in high-margin direct markets indicates that increased high tunnel use can increase farmer incomes and will, in turn, encourage increased participation in farm to school markets as farms seek to diversify their secondary markets or uphold their commitment to social values that farm to school activities yield.

Snug Haven Farm in Wisconsin is an excellent example of this in action. While not subsidized by EQIP’s high tunnel program, the farm’s CSA for premium winter spinach allows subscribing members to pay a little extra in order to help subsidize the farm’s supply of the same spinach to Farm to School Snack programs.  The success of the farm also allows it to continuously support farm to school activities in other ways, upholding the broader values of the farm. The work of Snug Haven Farm demonstrates how balancing high-margin markets with lower-margin markets can result in healthy, locally-produced food showing up in classrooms while ensuring the financial success of the farmers.

Since the inception of the EQIP Seasonal High Tunnel Initiative, the number of -funded high tunnels in the Upper Midwest has increased dramatically, with Minnesota, Wisconsin and Iowa averaging a higher number of newly constructed tunnels than the national 2010-2013 average. USDA data shows that of the 10,273 high tunnels funded nationally in 2010-2013, just over 12 percent were in these states. Despite this success, the high tunnel funding “eggs” remain primarily in the federal budget “basket.” This puts the future of high tunnel support at risk due to cuts such as those proposed by the Obama administration. It is critical that EQIP funding for dedicated high tunnels be reinstated in the federal budget.

At the same time, we need to encourage diverse options for farmers to gain access to resources to offset the startup costs of constructing high tunnels on the state and local level.  The Hoop Houses for Health program run by the Michigan Farmers’ Market Association (MIFMA) provides an excellent example for encouraging high tunnel use amongst farmers while also encouraging participation in farmers’ markets and farm to school markets. Participating farmers are able to repay their high tunnel construction loans by providing free produce to qualifying low-income individuals via farmers’ markets and farm to school programs. In doing so, the program promotes these markets in low-income communities while simultaneously increasing access to fresh food and reducing the financial burden of high tunnel uptake for farmers. It is a model that should be replicated throughout the country – particularly in states with limited growing seasons, such as those in the Upper Midwest.

Read Extending the Growing Season: High Tunnels Use and Farm to School in the Upper Midwest.