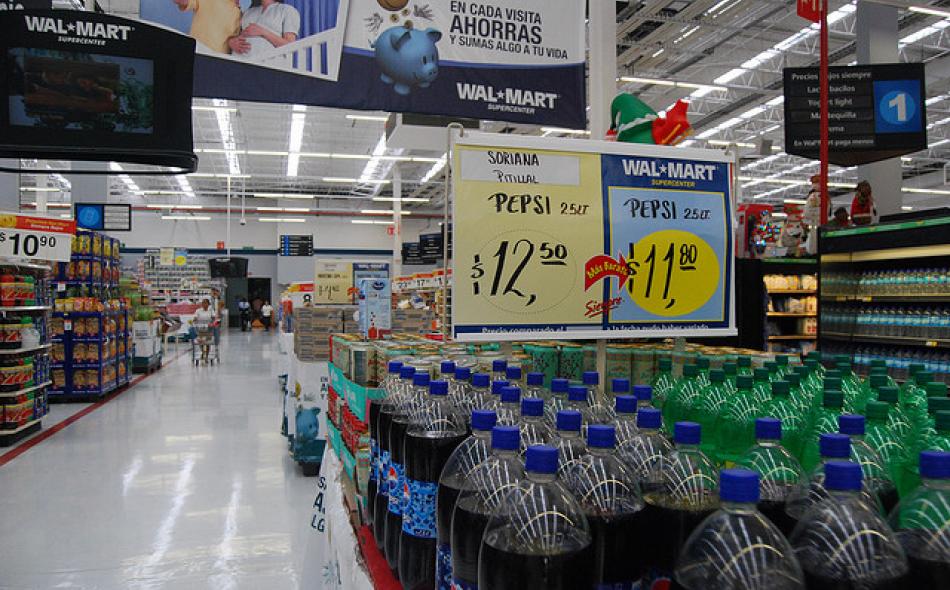 Efforts to solve the problem of hunger and poverty by turning to the same corporations that helped create the problem have gone viral. Michelle Obama and the President of Mexico have hit on the same scheme (and the same companies) for solutions to hunger and the growing crisis of diet-related illnesses. Both will likely make matters worse.

In a recent commentary, Stacy Mitchell of the Institute for Local Self Reliance asks the question, “Why is Michelle Obama’s food initiative promoting Wal-Mart?” Wal-Mart and other giant food retailers are part of Michelle Obama’s Partnership for a Healthier America, a national campaign that includes in its goals eliminating “food deserts,” economically depressed communities with limited access to food. Wal-Mart, a scandal-riven corporation, has wreaked havoc on regional and local food retailers with its profits-at-any-cost business strategy that leads to thoroughly uncompetitive business environments. Local grocery stores, both chains and Mom and Pop operations, have succumbed to the market dominance of Wal-Mart, leaving many communities without a place to buy food. The Partnership’s promotion of opening new Wal-Marts in poor neighborhoods is like inviting the fox to live in the chicken coop after he’s eaten all the little chickens.

Similarly, Mexican president Enrique Peña Nieto has his own campaign called Crusade against Hunger to help the estimated 7.4 million Mexicans who are underfed. In addition to Wal-Mart, the Crusade includes Nestlé, the largest food company in the world, and PepsiCo, the second largest food and beverage company in the world. With combined annual net revenue of over $100 billion, these two food giants have played an important role in lowering the quality of the food—and the health of people—everywhere.

Nestlé’s project in the Mexican Crusade is called My Sweet Business, a training course for woman on making desserts. PepsiCo has volunteered to develop a product to improve the nutrition of children and pregnant and nursing woman, according to Baby Milk Action. Both attempts at alleviating hunger are barely disguised attempts to take control of a greater share of the food market of Mexico.

To help them along, the Mexican government is planning to assign the Mexican military, an institution with a record of human rights abuses and involvement with narco-gangs, to the Crusade. The nexus of global corporations, the Mexican military and the government of Enrique Peña Nieto does not bode well for the welfare of the millions of hungry people in Mexico. This story has a common link, going back to the neoliberal policies of Ronald Reagan and Bill Clinton, called NAFTA. This free trade agreement displaced millions of Mexican farmers and virtually destroyed Mexico’s’ ability to feed itself. In addition to turning over the country to global corporations, NAFTA and the maquiladora system of manufacturing played a significant role in building an economy based on illegal drug trafficking. Looking to Wal-Mart and Nestlé to help Mexico or the U.S. is a continuation of the failed policies of globalization that have undone the bonds of community and created a poorer and hungrier world.