Everyone at the Table: Local Foods and the Farm Bill 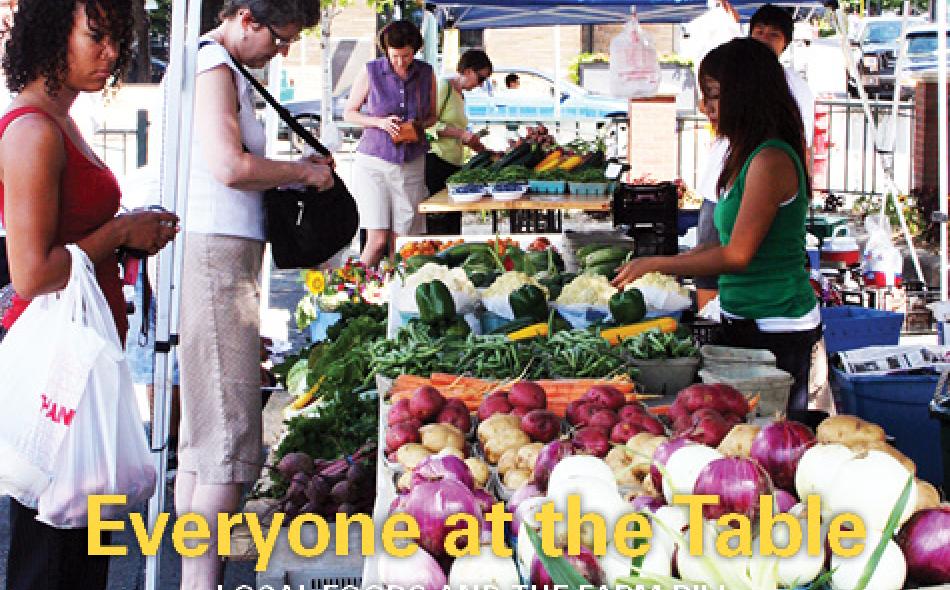 The local foods movement in the United States has grown by leaps and bounds over the last decade, but still represents a small portion of the overall food system. How can local food systems continue to grow and remain sustainable?

Every five years, Congress revisits farm and food policy in the U.S. through debate and reauthorization of the Farm Bill. For much of the last 40 years, farm policy has focused on promoting on-farm efficiency, developing domestic and foreign markets and supporting efforts by agribusiness to gain dominance of the global food market. These policies succeeded in making the U.S. a global leader in the production of a handful of commodities, and have dramatically impacted farmers, rural communities, the foods we eat and the environment.

Escalated efficiency, specialization and technological advances have increased the average size of farms significantly but have left far fewer farmers on the land. Farm Bill programs, coupled with trade policies supportive of corporate-led globalization, have played a major role in industrializing agriculture and concentrating the food production and processing industries.

Dissatisfied with the heavy reliance on agricultural chemicals and pharmaceuticals utilized in large-scale, industrial agriculture, many people have turned to purchasing their food from local sources that they know and trust. Their reasons are many: Foods grown for nearby markets are often harvested at the peak of ripeness and delivered while fresh and flavorful. Buying locally builds relationships between growers and eaters that aren’t possible when food is run through complicated supply chains across long distances. Short supply chains allow for greater transparency about how food is grown and processed.

Still other consumers are concerned about the large carbon footprint left by food produced on industrial-scale farms, processed by multi-national food conglomerates and transported around the globe. Buying locally grown foods can support area farmers and rural economies while building a sense of place and community.

Existing Farm Bill programs are designed primarily for commodity production in the form of subsidies, research, crop insurance and other risk-management programs. Similar programs are not available to small and mid-sized growers of fruit and vegetables and other, so-called “specialty crops.” Given the enormous bias in federal policy toward industrial production of commodities for agribusiness, it is no wonder that most of our food system is not fostering a healthy population or a healthy environment.

The past two decades have seen an enormous increase in demand for locally grown foods. According to the USDA, local food sales through all marketing channels reached $5 billion in 2007. Direct-to-consumer sales alone jumped from $551 million in 1997 to $1.2 billion in 2007 and the number of farmers markets has tripled—from 1,755 in 1994 to 5,274 in 2009. Additionally, there are now more than 2,500 community-supported agriculture (CSA) farming operations in the U.S. compared to 761 in 2001. Purchases of locally grown food by institutions such as K-12 schools, colleges and hospitals have also increased dramatically. Today, there are active Farm to School programs in all 50 states and locally grown foods are a key growth area in the retail grocery business.

While the marketplace is demanding more locally grown foods, local food systems receive only a tiny proportion of Farm Bill spending. Given rising consumer demand, this is the time for federal policy to step up to the plate and invest in local food systems development. Investing in our small and mid-size farmers and the distribution and processing infrastructure needed to connect “farm to fork” should be an integral part of the 2012 Farm Bill.

Policy changes in the Farm Bill could help level the playing field to bring much needed support to farmers, rural communities and urban consumers looking for sources of safe, nutritious food and a closer connection to producers who grow it. This should include leveraging new sources of capital and developing new farm insurance products that adequately manage the many risks faced by small and mid-size farmers and ranchers. Additionally, appropriately scaled processing, marketing and distribution infrastructure to aggregate and add value to locally grown foods is needed. Such businesses can create jobs and rebuild economic vitality in communities across the country.

The 2008 Farm Bill made significant first steps in the right direction. The 2012 should build on those steps by:

For all its influence, the Farm Bill is a deeply flawed approach to developing a national food and farm policy. It has more than 12 titles, each with its own constituency—looking at issues like rural development, commodities and conservation separately rather than as part of a larger system. Health currently has no place within Farm Bill programs. To truly transform our food system to support fairness for farmers and farmworkers, enough healthy food for all, community empowerment and environmental sustainability, we need to think beyond the Farm Bill. We need new ideas and new policies—and everyone at the table.