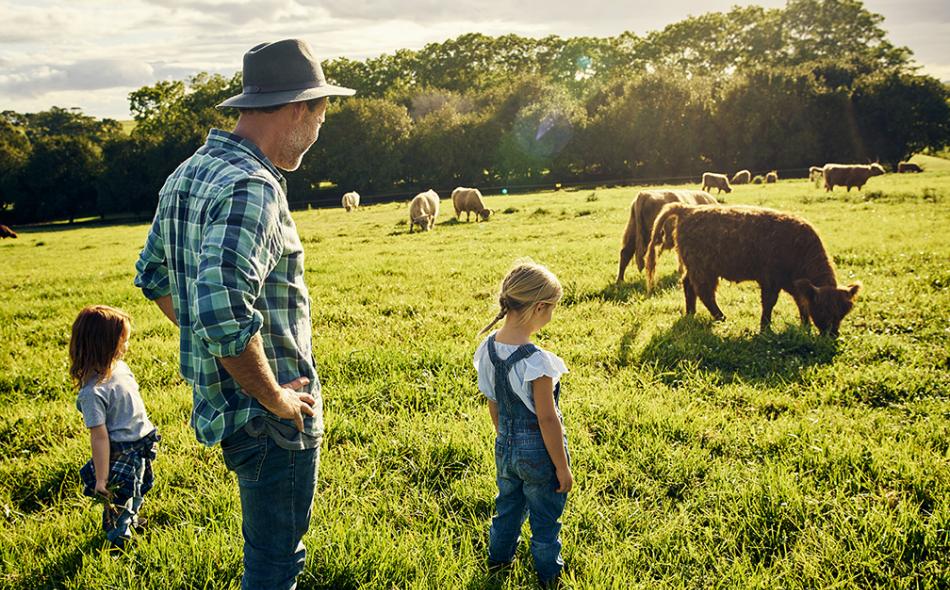 At the time the original Crisis by Design was written, the focus was on what we now call conventional agriculture. Organic and sustainable agriculture were not prominent in the U.S. Farm Crisis of the ’80s, nor were they highlighted by activists on the front lines. The focus of the movement, rather, was on the policies that were undermining family farm-based agriculture, regardless of agricultural practices. Since then, organic production and the standards that guide it have expanded dramatically, as have other expressions of sustainable agriculture, most notably agroecology and regenerative agriculture.

Organic production had been an alternative to the direction of U.S. agriculture in the ’40s and ’50s, albeit with fringe appeal and little presence in the market. The agricultural practices encouraged by J.I. Rodale1 beginning in the ’40s, based in building soil as the foundation principal, found an audience in response to increasing use of chemical inputs — pesticides and fertilizers — from off farm, and the trend toward monoculture and away from diversity of crops and livestock, as described in Crisis by Design.

By the ’70s, as the conditions for the farm crisis of the ’80s were stewing, there was a sprinkling of dedicated farmers who recognized the need to develop standards for the practices on the ground, in order to create a market in which they could differentiate their products from those that came to be known as conventionally produced goods. At the same time, there was a growing demand from consumers who had read Rachel Carson’s “Silent Spring,” who had an inkling that the food offered in supermarkets was maybe not healthy.2

Several independent certifying organizations sprang up during the ’70s and ’80s, some private and others associated with state programs. But while there was general and broad agreement on the philosophy of organic farming, there was a lack of standardization across these certifiers in regard to crop production, as well as a lack of standards at all for livestock and for handling and processing. Even more significantly, as larger food companies became aware of the profit potential in organic foods, they wanted in. Many examples of “organic lite” surfaced in the market, where those generally agreed upon principles were watered down in significant ways. The fledging organic industry, in a non-typical move, then asked the federal government to step in to regulate it for standardization, consistency and enforcement.

Perhaps ironically, the failure of supply management legislation in the 1985 Farm Bill spurred the growth of organic in some sectors. Farmers were left with few options to control their supply and, therefore, their prices. Conditions were ripening for making a point of difference in food for consumers who were paying attention. With the realization that they were on their own, organizations like CROPP Cooperative started up in order to implement their own supply management program, using organic as a point of differentiation. They took on only as many farmers as met their standards and whose production they could sell at the price they set, using the “conventional” market to absorb any excess.3

It took over a decade from passage of the Organic Foods Production Act in 1990 to the full implementation of the regulations in 2002, with unprecedented numbers of commenters to ensure the new regulations were sufficiently rigorous. 2002 was the first year that organic agriculture was officially recognized by USDA and recorded in the census. That year, there were 12,000 certified organic farms in the U.S. totaling just under $400 million in sales. The 2017 census reports 18,000 organic farms and over $7 billion in revenue. So, while organic farms grew by 50% in that 15-year period, against the trend in agriculture in general, the per farm revenue from organic crops increased almost 18 times, reflecting an increasingly robust market, domestically and internationally. 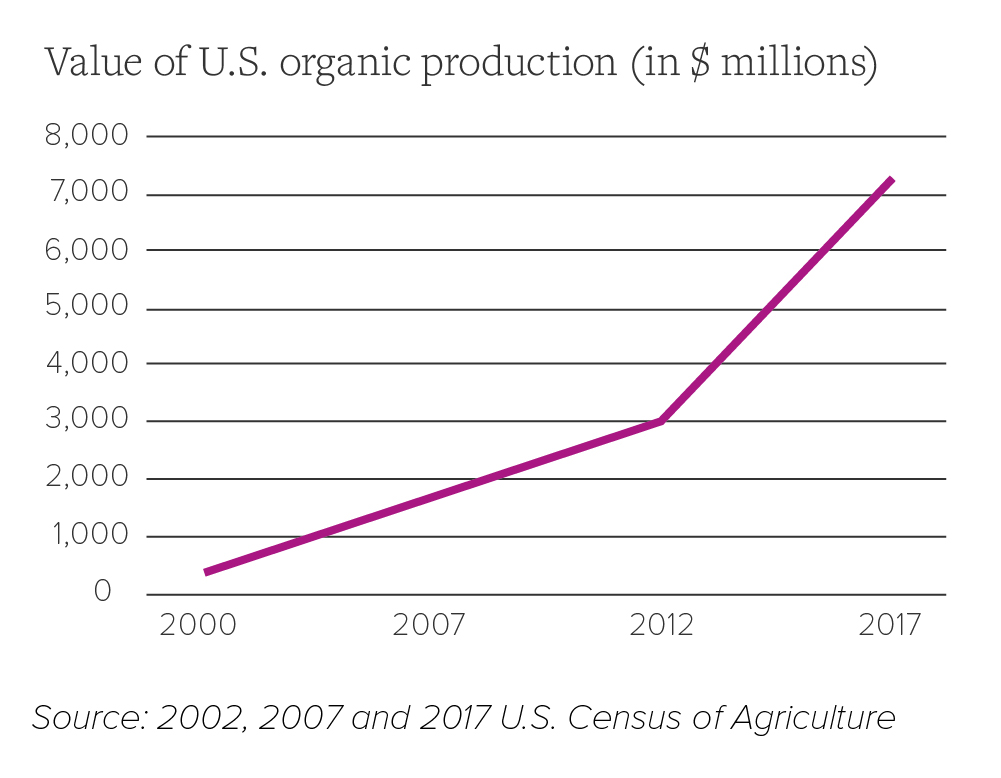 Organic retail sales reached over $50 billion for the first time in 2018. Significantly, year over year growth in organic food was 5.9%, while conventional growth was just 2.3%. In general, organic sales have grown by double digits for most of the last two decades.

Organic production has increased dramatically in other countries as well. According to surveys by the International Federation of Organic Agriculture Movements, global land under organic cultivation increased from 30.6 million hectares in 2007 to 69.8 million in 2017.4 While this data covers certified organic production, there has also been a dramatic increase in agroecological production, which could be certified through more informal methods such as participatory certification or not certified but based on relationships of trust at the community level.

Alongside this growth in certified organic production, farmers around the world have embraced the principles of soil building, elimination of chemical inputs and expansion of biodiversity that characterize organic agriculture, with some important additions. The term regenerative agriculture has emerged in the U.S. to emphasize the synergies between agriculture and the natural environment, while operating within or outside of the system of certified organic agriculture.5

The term agroecology has emerged at the global level. Based on principles first described in the 1980s in Latin America, particularly in pioneering work by Dr. Miguel Altieiri, agroecology emphasizes the interconnectedness among environmental, agricultural and social dimensions of food systems.6 It includes the concept of a “dialogue of knowledge” among farmers and scientists. It has been embraced by social movements around the world, especially La Via Campesina, which represents small-scale producers.

The U.N. Committee on Food Security’s High-Level Panel of Experts (HLPE) recently completed a study on agroecology as a solution to food security and nutrition. Acknowledging the transdisciplinary nature of agroecology and the diversity of definitions, the HLPE suggests “a concise and consolidated set of 13 agroecological principles related to: recycling; reducing the use of inputs; soil health; animal health and welfare; biodiversity; synergy (managing interactions); economic diversification; co-creation of knowledge (embracing local knowledge and global science); social values and diets; fairness; connectivity; land and natural resource governance; and participation.”7

Many of these principles overlap with the definitions of organic agriculture, but they include a dimension of political agency and participation that reach beyond the definitions of organic agriculture. In his report to the United Nations General Assembly on agroecology, U.N. Special Rapporteur on the Right to Food Olivier de Schutter emphasized that the most important policy support governments could provide (apart from removing obstacles such as corporate concentration) for this innovative approach was to invest in knowledge generation and social organizations, including farmer field schools and networks.8

A review of scientific literature examining social and economic indicators in 42 studies showed that adopting agroecological practices increased yields (in 60% of comparisons) and farm profitability (56% of comparisons).9 Because of its emphasis on minimal use of external inputs, recycling of nutrients through a high reliance on biological processes and agrobiodiversity, agroecological practices can be labor intensive but not necessarily cash intensive.

Organic agriculture, regenerative agriculture and agroecology share some important traits. Taken together, they represent an important and growing alternative movement that responds to climate change, builds soils and enhances rural livelihoods. At the same time, the diversity of definitions of regenerative and agroecological production make them more compatible with local food systems based on relationships of trust than larger national or international markets.

The organic industry faces significant policy challenges today. Consumer interests have changed over the decades, expanding from the primary and general concern for personal health, to encompass animal welfare, climate change and social justice issues. Changes to organic standards, which are codified in federal regulations, require tedious, slow rulemaking. Over several years, the industry had done the hard work of agreeing on more prescriptive animal welfare language, passed by Congress at the tail end of the Obama administration but tragically allowed to die under the Trump administration.

Corporate concentration in the organic industry continues at a fast pace, as mainstream companies acquire organic brands in order to be able to participate in this robust and growing sector. Some of these acquisitions essentially leave the acquired organic brand alone to manage the business; others, however, become part of ambitious plans to grow the organic brand. This can result in various kinds of distortions; unrealistic stretch for supply; downward pressure on price paid to producers; or perhaps even downward pressure on standards.

And now, the organic industry faces a new challenge, that of highlighting that the basic principles of organic—building soil and soil health, deep-rooted plants, grass-based ruminants — are consistent with regenerative agriculture, which is being presented as the hope for minimizing climate change due to agriculture. There is currently no agreement on the definition of regenerative agriculture—and this is both the challenge and the opportunity, reminiscent of the status of organic back in the 1970s.