Much more than our daily bread

As part our monthly series on agroecological practices, science and movements, we’d like to highlight this story from our partners at ARC20202 in Europe. The German Free Bakers association explains their role in the local food chain and the need for institutional infrastructure as part of the agroecological transformation. The following article was originally published by ARC2020 and reposted here with permission.

The Free Bakers Association (Die Freien Bäcker) was founded in 2011 as an independent professional organisation of artisan bakers and confectioners in Hanover, Germany. Through their work they promote the preservation and improvement of soil fertility, the cultivation of heterogeneous wheat populations and regional organic value chains. The Free Bakers are one of the organisers of the BROT-BRÜCKE (Bread Bridge), a relief action bringing bread to people in Ukraine since the Russian invasion in February 2022.

We want to preserve our sovereignty and credibility as food artisans. We want our craft to be suitable for our grandchildren — a creative, meaningful cultural technique. “Suitable for our grandchildren” means, among other things, being able to contribute to an ecologically and socially-just change in the agricultural and food sector with our businesses in regional value chains.

The subheading of our association’s name — “It is Time for Responsibility’’ — refers to the economic and ethical guiding principle of “honourable craftsmanship.” For us, this means developing our knowledge and skills in such a way that we are able to produce food for the region from regionally and agroecologically produced raw materials. This includes refraining from external industrial inputs and committing ourselves to the common good and fair corporate culture.

“External inputs” for us include so-called convenience products (baking premixes or industrially produced dough pieces) or isolated additives, such as technical enzymes or emulsifiers, which significantly simplify the production process, shorten it and change the properties of the baked goods and technology — which displaces manual work. In other words, it forces the manufacturer to adapt the raw material to the machine rather than the production method to the raw material.

Soil — An educational campaign for food transition by the Free Bakers

The Free Bakers got involved in soil because one of the most fundamental prerequisites for us to be able to bake healthy bread every day is the preservation of soil fertility.

But soils, their humus content, and thus their fertility are in increasingly bad shape. As a professional organisation with the motto “Time for Responsibility,” we do not want to tell the next generations that we knew about the state of our soils but did nothing. We are currently expanding the effective cooperation of bakers, millers, farmers — with the aim of preserving and improving soil fertility. Soil experts advise the project. Following courses in 2022 and 2023, qualified “Soil Ambassadors” will be available to conduct workshops via our Atelier Nahrungsmittelwende initiative, on the topic of soil for the training and further education of food artisans in vocational schools and businesses. 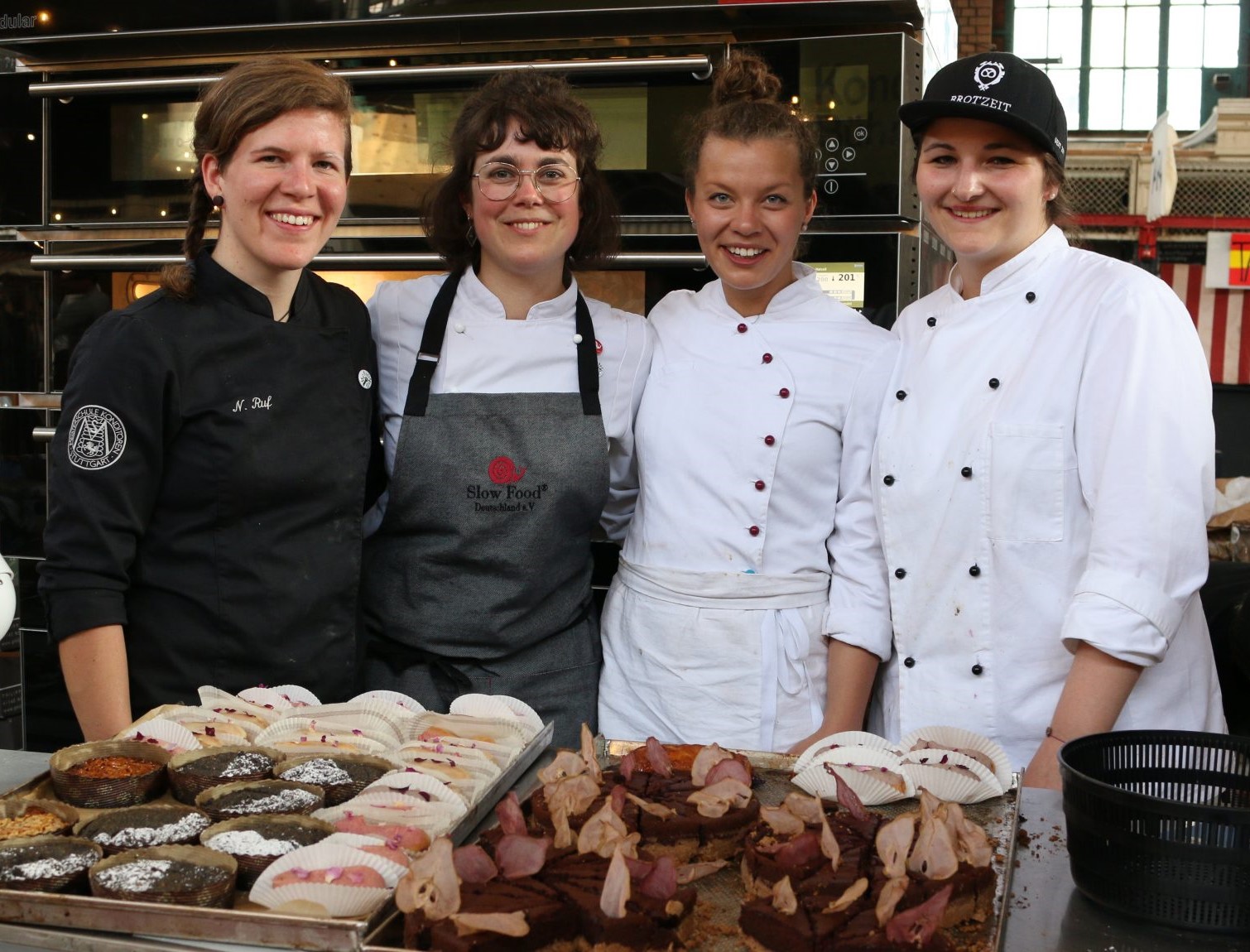 Below is a conversation with Anke Kähler, master baker and board member of the Free Bakers.

“We believe that rural and urban crafts can only survive if our businesses become a place of encounters and learning, where people discover what is really important for their life and future. It is not enough to bake and sell delicious bread. Healthy, living soils are important, which is why we organised the Soil Bread (Boden-Brot) campaign to give people an idea of how important it is to preserve and nurture the fertility of our soils.

In a way, we sensitise our customers every day to the personal and political environment in which we work and they live, so that they also carry our movement further. When it comes to the prices of artisan baked goods, which are usually higher than those of industrial products, they choose to support us and get quality products and good ideas in return.

Sandwiched between unfair competition and regulations

We feel like we are sandwiched between unfair market competition at the bottom and unfair production regulations at the top. The industrial baking industry has all the comparative advantages of size, it uses standardised raw materials and many types of additives. We have all the disadvantages of standards tailored to industrial production. These rules have not been adapted to the possible risks of our small-scale artisanal production methods.

With lower production volumes and higher labour costs, we are disproportionately burdened by these over-regulations, which hardly help to fulfil the goals they are supposed to serve. As competent, independent and socially responsible craftspeople, we are disenfranchised and penalised by rampant bureaucratic regulations.

Nevertheless, we can hold our own as independent bakers. Our supply chains and ingredient lists are short. Nothing goes into our breads and pastries that does not belong there. With our knowhow, we are able to produce tasty, healthy food with raw materials from agroecological value chains.

We want to move politics and consumers

With our ideas and values, we want to move politics and consumers. Among other things, we demand from politicians: stronger and better participation by the craft sector in the legislative process. Also, the formation of expert groups that review existing laws and regulations and develop practical regulations according to a graduated risk and hazard potential. And finally, support in the reconstruction of regional processing structures (i.e., mills, dairies, slaughterhouses, vegetable washing plants), as well as the establishment of sustainable vocational training across value chains.

Fair competition includes the creation of a regulatory framework that obliges companies to consistently determine and present the externalised costs of production, manufacture, storage and transport of goods. Labour intensive handicraft enterprises with the highest personnel expenditure ratios must be relieved by socio-ecological tax reform. Not least because they are the ones who provide a large number of social services.

More than our daily bread

As far as the necessary measures for the preservation and development of handicrafts in rural Europe are concerned, we need the establishment of independent regional centres for handicraft enterprises and farms. For the purpose of coaching, we need professional development and knowledge transfer from industry-independent research and development as an interface between craftspeople and authorities. This can promote dedicated cooperation in local food chains, which are so often mentioned in visions and strategies for rural development. This would also help to attract, retain and strengthen young people in rural crafts. At the moment, young people are often not able or willing to start or take over a craft business. Instead of making it more difficult to set up a business in the crafts sector by imposing countless requirements, start-ups that meet defined framework conditions in terms of economically, ecologically and socially sustainable development should be promoted. The food trade, just like rural agriculture, is of great importance for an agroecological, generation-appropriate, and resilient economy. So, we Free Bakers bake much more than our daily bread — we draw people’s attention to the values of craftsmanship, to fair food chains and to active citizens.

BAKWERT stands for “value and acceptance of heterogeneous wheat populations in agroecological food value chains.” The BAKWERT project aims to generate regional organic value chains consisting of organic farms, organic mills and organic artisan bakeries. Climate change, with its strongly fluctuating environmental conditions, puts cultivated plants under increasing stress. There is a growing need for plants that can react dynamically to pronounced drought, heavy rain or disease pressure. A promising approach is the cultivation of highly diverse wheat, also called “heterogeneous populations.” In order to stimulate and support farmers to grow wheat populations there must be a chance that the average lower yield of wheat populations will be compensated by a higher price on the market. The creation of added value needs cooperation along the entire chain from the field to the bakery.

The BAKWERT project aims to promote the cultivation of population cereals, short distance marketing, milling and processing into bread and direct selling to final consumers. Heterogeneous winter wheat populations are being cultivated in the German states of Northern Hesse, Lower Saxony, Baden-Württemberg and Bavaria and tested with the participation of organic mills and bakeries.

To learn more about the Free Bakers’ initiatives and many other stories of rural action from across Europe, look out for [ARC2020’s] “Rural Europe Takes Action — No more business as usual” [launched] on June 7.

Read other articles in our agroecology series:

Food sovereignty: A social construction from the field