Food sovereignty: A social construction from the field

This article is the first in a series of articles highlighting the work of our colleagues around the world to build agroecological practices, science and movements. Agroecology has emerged as a set of practices based on principles that guide how to produce food sustainably, as well as how to manage the social relationships that govern food production, processing, exchange and waste management in a fair manner. We hope this series will show how, as a systems approach, agroecology can address the multitude of problems within our food system from field to plate. 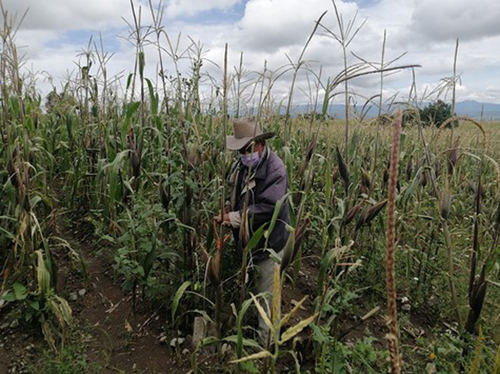 A September morning with a light drizzle and the presence of don Trinidad (don is a term of respect in Spanish) in his field is the setting for an interesting conversation about this farmer’s participation in the Technical Accompaniment Strategy that is part of the Production for Wellbeing Program promoted in 27 Mexican states by the Ministry of Agriculture and Rural Development’s (SADER) agency for Food Self-Sufficiency. Mr. Trinidad Angoa Solís is a farmer who has known the ups and downs of national agricultural policy over several decades. He is one of the millions of Mexican farmers who resisted the onslaught of neoliberal policies over the last four decades. Frank, friendly and cordial, he preserves the hospitality and generosity of our farmers, an heir to the ancestral Otomi culture that is still present in Ixtenco, Tlaxcala.

Don Trinidad's joy today contrasts with his bad memories of previous governments’ policies: "I used to spend two, three, four or five days when they gave us corn or when they set up times at the factory to go get the materials they gave us. I always kept an eye on the support programs; I would go to line up at midnight to be among the first and leave at 10 a.m. and then everyone else would do the same... there would be long lines." Indeed, the delivery of fertilizer or other support from past governments was one of the trappings that politicians and companies deployed to preserve their control over farmers. It was the corporate and clientelist policy that distinguished those governments. Now don Trinidad is an enthusiastic participant in the SADER program. He is pleased with the results in the demonstration plot of land that he set aside to implement the "agroecological transition" promoted by the Undersecretary of Food Self-Sufficiency. In this effort, he works with a technician who lives in town and to whom he can go for advice at any time. He commented that "It’s different than before, when the technicians would just come and leave or just come to sell us the weed killers.”

Gilberto Juárez Flores, an agronomist, is the technician responsible for two programs: technical support for agricultural production and the Ministry of Labor’s "Youth Building the Future" program. That program seeks to train young people in the knowledge of the countryside, with the idea of forming new farmers with a different vision, far from the agricultural practices of the Green Revolution. The technician’s work is fundamental to the agroecological transition. The approach is not limited to the introduction of new productive practices; it also has an impact on the formation of new social relations that abandon the conventional approach to agriculture. This activity is central to shaping the identity of agroecological farmers and is based on a horizontal relationship between so-called scientific knowledge and traditional knowledge.

The changes in the production process show that farmers’ dependency, as generated by the Green Revolution, is beginning to be replaced by a self-managed process that is based on ongoing dialogues. In situ, the farmer discusses his problems with the technician, who consults, reviews bibliographic material and reflects on his or her own experience. These are moments of mutual learning between the farmer and the technical advisor. It is not the kind of top-down "scientific" directives that come from the big agribusiness companies; it is the renewal of peasant knowledge that interacts with the technicians trained in agroecology. Thus, a new way of farmer and technician interaction emerges in which they guide each other in their walks through the fields. They are part of a transformation in the countryside, as together they are both professionals responsible for collaborating in the construction of food sovereignty from the field, a mission that goes beyond providing food to the population, to ensure that it is healthy and free of agrochemicals that damage the land and the human body.

Eliminating farmers' dependence on agrochemicals is one of the strategic aspects of food self-sufficiency. According to Gilberto, the technician in Ixtenco, "the idea of the program is to try to break this dependence on chemical inputs, so that they can make their own inputs and have them ready when they need them, at the right time for the crop..." The preparation of composts and foliage empowers the farmer to control the productive process. Overall, this involved a learning process carried out together with the technician, it is a new relationship of knowledge generation that fills some of the gaps in higher education institutions and research centers. Achieving food sovereignty is a strategic policy that requires the horizontal integration of peasant knowledge, scientific knowledge and government action. This new farmer-technician partnership that should have an impact not only on food production processes, but also on the transformation of the country's food supply chains, which are linked to the creation of a domestic market capable of meeting the country's food needs.

The program began in Ixtenco in April 2020. Don Trinidad says that this is the second planting, and "we are happy and satisfied, we have already seen the results, which are very good... I hope they do not take away the engineer who has been helping... in beans... we had excellent beans, that is a demonstration of what organic fertilizers do with micro-organisms, I am very happy with the micro-organisms, I have continued producing to apply them, so that they will make nutrients and in the next planting we’ll have no complaints!" The introduction of these techniques in the field and the gradual elimination of agrochemicals — along with good practices carried out in a timely manner, — have made it possible to reduce weeds in the cornfield. “The most important thing is that little by little we begin to recover plants that were almost not seen anymore, such as jaltomate and quelites [edible wild greens] due to the use of herbicides, says don Trinidad"

Not only does this partnership between farmer and technician have immediate results in the cultivation of native corn, but it also serves as an example that is not enough to achieve agroecological agriculture in this village where only a small group of farmers has decided to join the agroecological transition. The national strategy requires the combined efforts of the "Sembrando Vida" Program of the Welfare Ministry and SADER’s "Production for Food" Program. The full coordination of both strategies and the participation of universities and research centers can make the Food Sovereignty policy an effective, efficient, far-reaching and beneficial State policy for feeding the population of the Mexican nation.

Read other articles in our agroecology series:

Much more than our daily bread