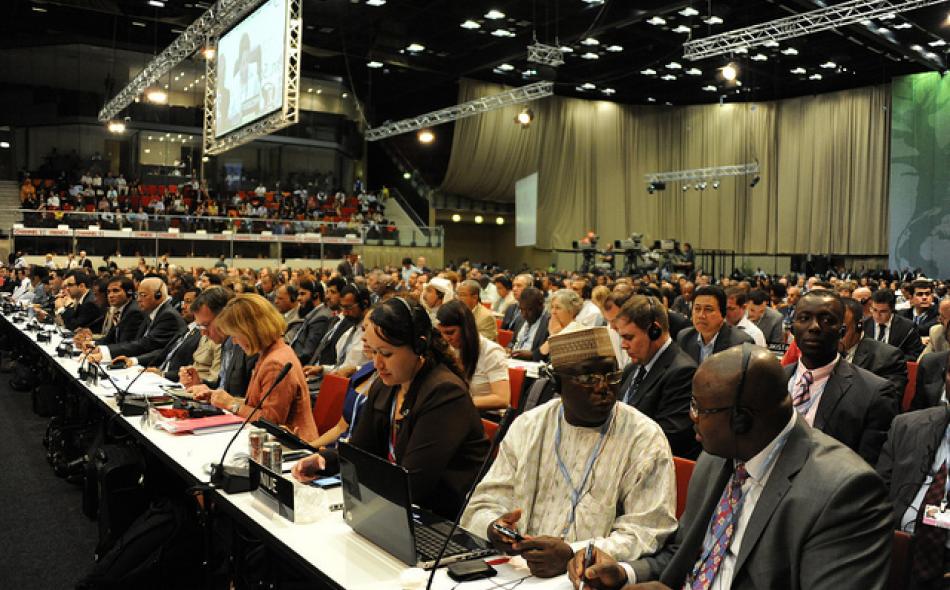 The 17th Conference of the Parties (COP17) to the United Nations Framework Convention on Climate Change (UNFCCC).

A bargaining chip is usually something withheld to get consent for something bigger, not smaller. The United States (and Saudi Arabia) blocked consensus on establishing a Green Climate Fund (GCF) for the U.N. Framework Convention on Climate Change at an October 18 meeting in Cape Town, South Africa. The U.S. would not agree to establish a financial mechanism for the $100 billion in climate change project investments promised at the 2009 UNFCCC Conference of the Parties (COP) until a long laundry list of demands were met.

Chief among the demands was that the UNFCCC not have oversight of the GCF and that there be a private sector facility for corporations to access public money for use in projects that would not have to be approved by the countries where the projects would be carried out. The end of the Kyoto Protocol, which requires developed country parties to commit to binding reductions in greenhouse gases, is also among the bigger goals the U.S. seeks to achieve in Durban, South Africa. Therefore, withholding approval of the GCF, and money to operationalize it, are key U.S. bargaining chips.

Another less publicized bargaining chip is U.S. government support for an agricultural work program. A decision to start a work program would provide a UNFCCC stamp of approval for the World Bank’s creation of agricultural carbon emissions offset projects in developing countries. IATP has criticized one such project in Kenya. Instead, IATP, together with other civil society groups, has forcefully argued for prioritizing the financing of adaptation of agriculture to climate change, particularly in Africa and other most vulnerable regions. South African President Jacob Zuma has promised an agricultural work program as a “Durban deliverable.”

Knowing when and where to advocate for agriculture is a diplomatic puzzle. Negotiations are supposed to take place in a transparent environment, open to all COP parties. Some meetings are open to civil society and other nongovernmental observers. But the negotiating of the text at the 2010 COP in Cancún, Mexico replicated the World Trade Organization practice of “green room negotiations,” which take place with only a few parties and result in the presentation of a “take it or leave text” on the last afternoon of the last day of the negotiations. Most parties want to avoid the accusation in the mass media that they have blocked “progress” on a COP agreement.

By refusing to commit to binding emissions, as the rest of the COP wants, and by blocking a fund to finance projects to reduce greenhouse gases and adapt to climate change, the U.S. holds a strong hand in the negotiations. Added to that hand, will be the disposition of the South African COP presidency to guarantee a text amendable to the United States. Though the U.S. may have a strong hand to play with lots of bargaining chips because of its obstructionism, the ultimate loser will be the climate—and all of us affected by it.