Why Democracy Awakening Is Essential for Changing our Food System 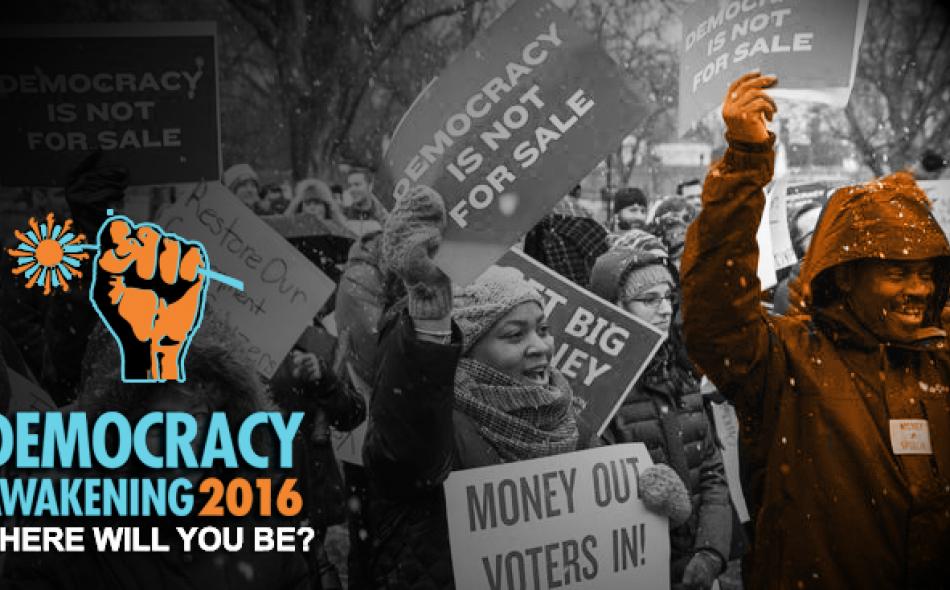 It’s campaign season—a time when the pervasive influence of money in our political system seems to slap us in the face with each new political ad. This weekend, tens of thousands of people and more than 200 organizations will rally in Washington to demand Congressional action to address the corrupting role of big money in our political system that has shifted into overdrive following the Supreme Court’s disastrous Citizens United ruling and to protect voting rights under attack in states around the country. This effort for political reform, called Democracy Awakening, is essential if we hope to transform our farm and food system to one that is fair for farmers, protects the environment and climate and produces enough healthy food for all.

The challenges that we face in our food system are too big, too complex and there is too much at stake, to allow a handful of largely multinational corporations such disproportionate political influence. In food and agriculture policy, the power of corporate money in our political system is literally everywhere. In the last Farm Bill, the crop insurance industry flexed its muscles through more than $57 million in lobbying firepower to shift government payments to benefit the industry. From buying state ballot initiative wins on GMO labeling and pro-factory farm “Right-to-Farm” rules, to rolling back financial reform that wreaked havoc in agriculture markets, to blocking the fight to increase the minimum and tipped-minimum wage—the fingerprints of corporate money and influence seem to be omnipresent.

One of the clearest examples of big money influence is the prize at the top of the multinational corporate and financial industry agenda—new free trade deals. To the surprise of many in the political establishment, the proposed Trans-Pacific Partnership (TPP) is unpopular among primary voters and has drawn the ire of Presidential candidates in both parties. The trade deal involving 12 Pacific Rim countries was negotiated largely in secret, shaped by advisory committees dominated by corporate interests.

To lay the groundwork for the TPP, Congress needed to pass Fast Track trade authority last year. Fast Track gave President Obama the right to conclude TPP negotiations in secret and present a final version of the deal to Congress for a simple up or down vote. The corporate interests that invested heavily in the passage of Fast Track are a virtual who’s who of inside-the-beltway power: the U.S. Chamber of Commerce, US Business and Industry Council, American Natural Gas Alliance, Bayer, Caterpillar, Coca-Cola, GlaxoSmithKline, Koch Industries, Pfizer, Dow Chemical, JP Morgan and Kraft Foods, among others. At the end of the day, according to Maplight, corporate interests supporting Fast Track contributed more than nine times as much money to House members ($197 million), compared to interests opposing Fast Track ($23 million). That investment paid off with the passage of Fast Track in June 2015.

Now the focus of corporate lobbying has now shifted toward the TPP, where corporate lobbying, and specifically lobbying from agribusiness, has jumped. The rejection of the TPP by leading Presidential candidates has slowed momentum for the TPP, but there is talk of Congress considering the controversial trade deal in the lame duck session (after the election and before the next President and Congress take office).

The Democracy Awakens rally and growing movement to reform our political system is critical for determining the future of our farm and food system. Rally supporters, including IATP, are calling for Congress to pass five bills that will take a big step forward toward reasserting the power of citizens in our political process. Those bills are:

The Presidential campaigns for both parties has produced some unexpected results—much of which is linked to growing discontent over how our government works and who it represents. A recent New York Times poll supported what many others have found—that there is strong support for addressing excess money in our political system. It’s time for Congress and the President to pay attention.