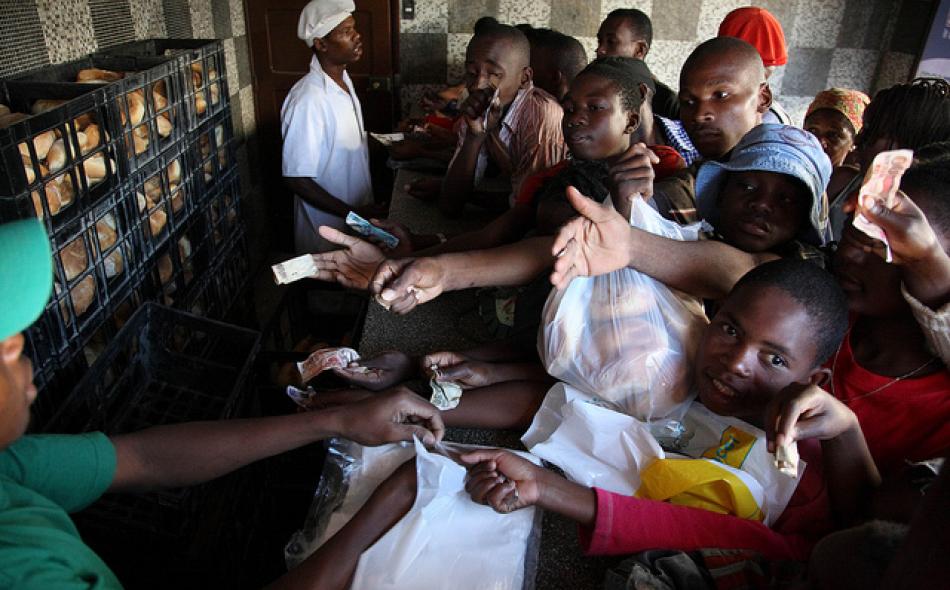 Bread is in high demand after it arrives at a bakery in Mozambique, where people have rioted over the high price of bread and other staple foods.

FAO produces an excellent state of the world's agriculture twice a year called Food Outlook (in all 6 U.N. languages). The latest, just out last week, includes the following startling fact: "This year’s global food import bill is expected to approach $1.3 trillion USD, with the cost of food purchases for the Least Developed Countries (LDCs) soaring by over a third from last year."

The LDCs are the countries least able to pay these costs, of course. According to the FAO paper (available at the WTO website), this increase is not an increase in the volume of purchases, but almost all in the higher prices LDCs are paying. While prices have started to come down recently, these changes are not yet reflected in the import bills paid. The price increases are more marked because the U.S. dollar, the currency used in most international commodity transactions, has lost value over the year. The bulk of the cost in the LDC bill is in grains, although in the global total, it is animal protein (including fish) that is the biggest item.

It's a fact that should give everyone pause. It was a topic at last week's meeting of the WTO's Committee on Agriculture. The World Bank presented a paper that held countries' trade-distorting practices responsible for soaring prices. Argentina, predictably, took umbrage: it insists it is fully entitled to tax its exports (pity it does not extend the same courtesy to importers who wish to tax imports to support local production). If only it were that simple.
According to the WTO's account of the meeting, Egypt presented a proposal on behalf of Net Food Importing Developing Countries, the Arab Group and the African Group. The proposal would ask the Ministers who come to the December WTO Ministerial Conference to recognize that ensuring food security for their populations is governments’ first priority. The proposal asks the Ministerial Conference to direct the General Council to set up a comprehensive work program for least developed and net food-importing developing countries, to:
No decision was taken on the proposal. It remains to be seen if it will make it into the final declaration from the Ministerial Conference.
Whether or not it succeeds, it is surely long past time hunger got serious attention from the WTO and elsewhere. The politics of food do not readily accommodate the typical economist's modeling exercise. The revolutions that shook the Middle East this year are potent examples of this. Perhaps Argentina's blatant hypocrisy is, too.
Not that the WTO can do much—it has not the mandate nor the remit. But its rules are a problem. They do not contribute either the confidence or the flexibility required to ensure trade supports food security objectives. Devised to support the export interests of a handful of economically dominant countries, the Uruguay Round rules need urgent reform. The sooner the Doha Round is buried and the WTO gets on with being the permanent trade negotiating forum it was created to be, the sooner governments can get serious about correcting the imbalances of the Uruguay Round Agreements. Sixteen years on, it won't be too soon.
Filed under
Agriculture
Food security
World Trade Organization