Deutsche Bank and the fine art of self-exoneration 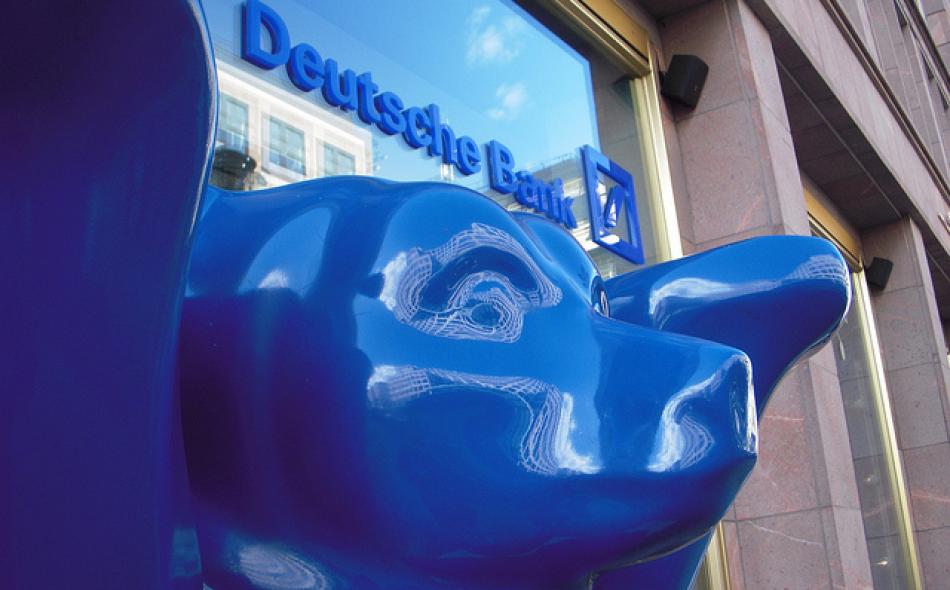 On January 19, Deutsche Bank (DB) issued “Questions and Answers on investments in agricultural commodities”.  The DB stated that after an internal examination, it was resuming investments in agricultural derivatives contracts that it had suspended since March 2011. Nongovernmental organizations had successfully pressured the DB and a few other European banks to “stop gambling on hunger” due to the banks’ concern about risk to their reputations. The World Development Movement had organized an October 2011 letter signed by 450 economists to the Group of 20 (G-20) demanding an end to bank speculation on agricultural contracts, so the DB was an early adopter of the investment moratorium.

The derivatives contracts include both the regulated futures and options contracts that farmers and food manufacturers use to protect against price decreases and increases respectively, and the unregulated over-the-counter (OTC) contracts. The DB’s internal investigation, bolstered by non-cited studies of unnamed agricultural economists, found “there is little empirical evidence to support the notion that the growth of agricultural based financial products has caused price increases or volatility.”

Nor, of course, had financial speculation on agricultural commodities contributed to increased food insecurity and hunger, particularly in developing countries. Indeed, the statement concluded, financial speculation should not be limited by regulatory instruments, such as position limits on the share of the commodity derivatives contracts that any one entity and its foreign affiliates could control. To deny the effects of financial speculation on agricultural prices, Deutsche Bank had to ignore studies, such as those of Dr. Stephan Schulmeister’s trenchant analysis that showed how 1,092 algorithmic models for trading commodities have driven commodity price volatility. Schulmeister’s studies have been very influential in building European—and particularly German—government support for a Financial Transaction Tax to reduce the volume and volatility of such trading. On January 22, 11 European Union member states committed to levying an FTT.

It would be truly extraordinary for any bank—even one that had received $711 billion of U.S. Federal Reserve Bank emergency loans, as Deutsche Bank had as of November 2011—to admit to systematically dangerous investments that required a U.S. bailout to prevent the DB’s insolvency. (At a DB co-financed conference in November in Berlin, former IMF economist Randall Wray reminded participants of the scale of the bailout, in the context of a presentation on “What Banks Should Do” (slide 15). Professor Michael Greenberger, an advisor to Americans for Financial Reform, presented on “The Imperative of the Extra-territorial Reach of Dodd-Frank.”) But even by the standards of Too Big to Fail Bank self-exoneration and impunity from effective prosecution, the DB press release was a masterpiece of mea exculpa. (To be fair, in May 2012, Deutsche Bank and its U.S. affiliate Mortgage IT did admit to wrong-doing for reckless lending practices and paid a $202 million fine in a civil fraud case brought by the U.S. federal attorney for the Southern District of New York. Generally speaking, U.S. federal agencies allow corporate miscreants to pay usually risible fines without admitting guilt, thus protecting the corporations from further civil suits.)

Cynics will say that the result of the internal examination was preordained in the 2011 report of the Institute of International Finance (IIF), then headed by the Deutsche Bank CEO Josef Ackermann, to the G-20 finance ministers. The IIF report concluded that speculative investments by IIF member banks played no role whatsoever in the commodity price bubble and collapse of 2008–09 that triggered the ongoing G-20 investigation into commodity price volatility. The report further alleged that there was no economic evidence to demonstrate that anything but supply and demand fundamentals determined agricultural or other commodity derivatives prices.

A September 2011 letter from the Berlin based NGO World Economy, Ecology & Development (WEED) and several other NGOs rebutted the IIF report. They appended to the letter an annotated bibliography of studies documenting the effect of financial speculation in commodities trading. The list comprises now well over a hundred studies, many of them peer-reviewed academic studies. Many of the studies concern OTC energy derivatives contracts, particularly oil and gas. These studies are relevant to agricultural prices insofar as energy contracts are the dominant contracts in commodity index funds and index trading strategies, traded both OTC and on regulated commodity exchanges. In most index funds, agricultural contracts are the tail wagged by the energy contract dog.

Clearly, agricultural supply and demand factors are structurally important—but by no means the only—determinants of agricultural raw materials prices. The DB internal investigation must have failed to look at agricultural prices and its agricultural contracts included in the commodity index products it buys and sells as part of a purportedly effective portfolio diversification strategy for its clients. Portfolio diversification is not driven by short-term, or even long-term, agricultural supply and demand fundamentals but by the trading formulas and overwhelming weight of money of portfolio investors, such as pension funds and endowments. A recent essay by Myriam Vander Stichele shows how commodity exchange–traded funds, such as those of Deutsche Bank, pose risks for consumers, retail investors, institutional investors, commodity markets and financial markets.

That weight of money and the volatility induced by the rolling of indexed contracts drives commercial hedgers out of markets when the costs of trading in non-fundamental factor volatility become too high even for large agricultural derivatives investors. (To be fair, one of DB’s advisors, Dr. Andreas Beck, advised in January against including commodities in exchange-traded funds.) The studies Deutsche Bank reviewed could only have been of data from the regulated futures and options market and not studies evaluating data from the still unregulated and dominant OTC commodity derivatives market.

Corollary to the Deutsche Bank et al self-exoneration is the denial that cross-border government regulation of the OTC market is necessary. This denial was manifest in the voluminous foreign government and multinational bank comments on the draft Commodity Futures Trading Commission (CFTC) guidance on the cross-border application of CFTC rules on OTC trading to the foreign affiliates of U.S. banks. Deutsche Bank was among those banks that argued that foreign regulators, and not U.S. regulators, should decide whether or not their regulatory regimes provided “comparable comprehensive oversight” of the markets, as required by the Dodd-Frank Wall Street Reform and Consumer Protection Act.

In an August 27, 2012 letter to the CFTC, Deutsche Bank argues that the CFTC should not have access to foreign OTC data depositories to verify that the foreign affiliates of U.S. OTC dealers are complying with Dodd-Frank. Furthermore, Deutsche Bank and others argued, the CFTC should adopt a narrow definition of “U.S. person” to exclude foreign affiliates of U.S. OTC dealers from liability for Dodd-Frank violations. No data access, no data surveillance, no enforcement, no violations. In other words, Deutsch Bank et al argued for no consequential change from Bush administration non-regulation of markets.

On December 4, regulators from more than a dozen national jurisdictions, including the European Union and the United States, issued a joint press statement about their intent to cooperate to regulate OTC markets “consistent with their [national] mandates.” Likewise, trade data access or lack thereof, due to data privacy laws protecting banks, would be consistent with national mandates. The diplomatically crafted statement left open the possibility that some of the signatories would be less than cooperative in turning over the data necessary for effective cross-border regulation of the global OTC market.

The foreign government and bank comments resulted in the approval of weakened cross-border guidance by the CFTC on December 21 and the granting of a six month extension to the banks and their foreign affiliates to register as OTC dealers with the CFTC and show other steps toward complying with Dodd-Frank. Registration is the first step toward regulation that will require the U.S. headquarters of the foreign affiliates to aggregate trading data for surveillance and possible enforcement actions.

By restricting the data field of its internal examination to that of regulated commodity markets, Deutsche Bank steers our attention away from the vast and unregulated OTC market. Its lobbying effort, and that of the Too Big To Fail banks, seeks to keep regulation by principle (otherwise known as “light touch regulation”), rather than regulation applied to the mandatory, comprehensive submission of trading data. A recent International Monetary Fund staff discussion note estimates that the collateral posted to trade $600 trillion in OTC trades annually was just $600 billion, or a dollar posted for every $1,000 in gross notional value (face value of each trade). Such a lightly collateralized market needs both more collateral posted and more stringent regulation, not less.

So, as a result of Deutsche Bank’s self-exoneration, it will profitably resume those investments and join the chorus of bankers urging regulators to simply trust that these actions won’t result in another food-price crisis, another financial meltdown or yet another bank bailout. Trust, but don’t verify (as data won’t be forthcoming anyway).