This year has demonstrated the devastating impacts of climate change on rural communities, from the Iowa derecho to wildfires raging across the west. Despite the increase in extreme weather events, longstanding cultural and political obstacles have hindered support for climate action in rural communities. Since 2014, IATP and the Jefferson Center partnered on the Rural Climate Dialogues (RCDs), which engaged rural communities on climate by focusing on solutions and shared community values rather than assigning blame. This week, IATP released a report that shares the project’s outcomes and lessons for rural climate engagement.

The recent election showed a continuing divide in voting patterns between urban and rural areas. The RCDs worked to consider climate change, a typically divisive topic, outside of the polarized political process by connecting over shared community values. The RCDs empowered communities to develop their own approach to addressing climate impacts in a way that boosted resilience and maximized other community benefits. Community-driven climate action has real benefits over top-down approaches, and these lessons should be noted by policymakers and integrated into any future state and federal climate action.

When considering climate policy, it’s important to acknowledge that climate change is just one in a series of economic and social challenges that are hitting rural communities disproportionately hard. Rural communities have higher poverty rates, lower incomes and poorer health outcomes compared to their urban counterparts. The farm economy is the worst that it’s been since the 1980s, creating ripple effects in rural agricultural communities, impacting local seed and equipment dealers and other local businesses. Rural city and county budgets are frequently strained, making it hard to maintain quality infrastructure. These challenges tend to be the focus of attention and resources in rural communities. Understandably, a phenomenon as seemingly distant as climate change rarely takes the front seat, and climate policies that could increase costs or create new costly regulatory hurdles feel dismissive of rural realities.

The RCDs recognized these challenges and were designed to offer a productive new approach to engage rural communities on climate change. The events used the Citizens Jury method for community problem solving and leadership development. This approach brings together a microcosm of the community over multiple days to study an issue in-depth and generate a shared community response. By creating space for conversation and emphasizing deep listening, the RCDs create ideas for local climate action that reduce climate-related risks while increasing opportunities for better rural livelihoods.

From 2014-2020, IATP and the Jefferson Center completed three phases of RCDs in Minnesota. The first phase worked in Stevens, Itasca and Winona counties. The focus of these events was increasing community resilience in the face of climate change and extreme weather. The second phase worked in the same three counties and zeroed in on local energy systems. The third phase worked in Redwood and Murray counties in southwestern Minnesota and focused on wind energy siting, which has become contentious in many areas.

Each county’s event was tailored to the region’s economy and priorities, resulting in unique and place-based recommendations. For instance, Stevens County recommended ways to strengthen the local agricultural economy, Itasca County prioritized managing forests for the local forestry industry and Winona County explored local development of clean energy. The full recommendations for each county and each event are included in the final reports, available at www.iatp.org/rural-climate-dialogues.

After each event, we worked to bring the recommendations to life. Participants presented their recommendations to county commissions and city councils, state agency staff, the Rural Minnesota Energy Board and other local collaboratives. We also worked with local media outlets to write and broadcast follow-up articles and interviews about the event. In each county, we partnered with community leaders to brainstorm action plans, help secure funds for projects and add capacity at the start of projects.

This work led to significant climate action in each community. In Stevens County, the Morris Model formed and has since led projects around energy, water and waste management. Itasca County pursued installing a community solar garden. Winona County created an Energy Action Plan for the City of Winona that included the bold goal of carbon neutrality by 2050. Both Redwood and Murray counties have collaboratives and organizations addressing the local impacts of wind energy; the RCDs helped inform their understanding of local perceptions of the benefits and drawbacks of wind development.

In 2016, we hosted a State Convening that brought residents of Stevens, Itasca, and Winona counties together with staff from 10 state agencies. Because state agencies do not often have the opportunity to engage directly with rural Minnesotans, the voices and unique concerns of these communities are not fully reflected in agency policy or their promotion of existing programs. From the rural participants’ perspective, they often felt left out of policy and without a solid understanding of the state resources available to them. Engaging in small group conversations and sharing stories provided an avenue to feel heard and build relationships in a way that could improve state offerings for rural areas.

Despite the participants’ differences, they expressed appreciation for how the RCDs brought the community together. A participant at the Itasca County event noted, “I came away impressed with how diverse of a group we were, that we could come away with a common goal. That gives me hope for the community at large.”

To start to heal the divisions within our country, we need to engage with one another in ways that build empathy, are rooted in deep listening, and focus on each community’s distinct hopes, challenges and sense of place. The RCDs are an example of such engagement and hold critical lessons for policymakers. The new Biden administration has outlined bold goals for climate policy. For the administration to be successful, they must genuinely engage rural communities and ensure that climate policy reflects rural realities. 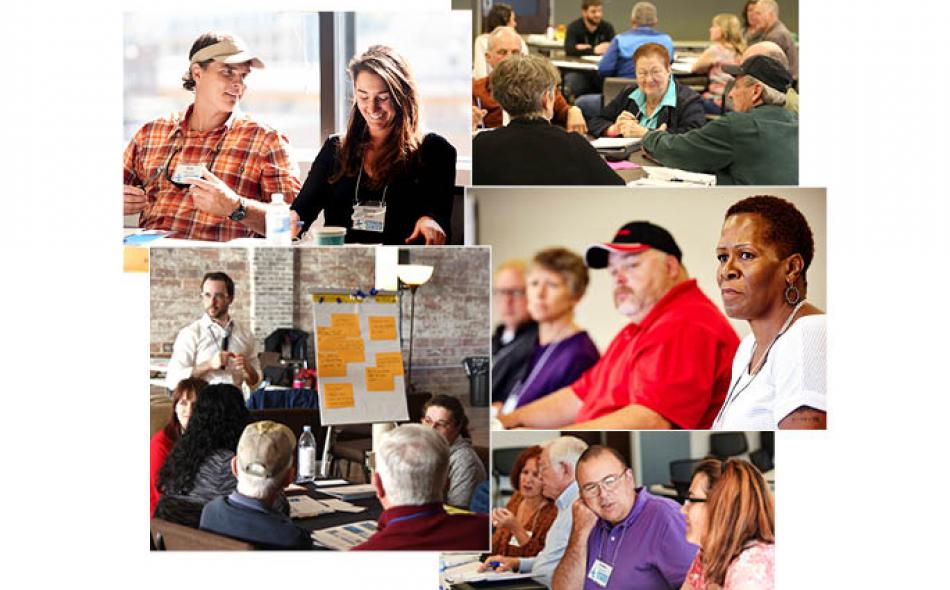