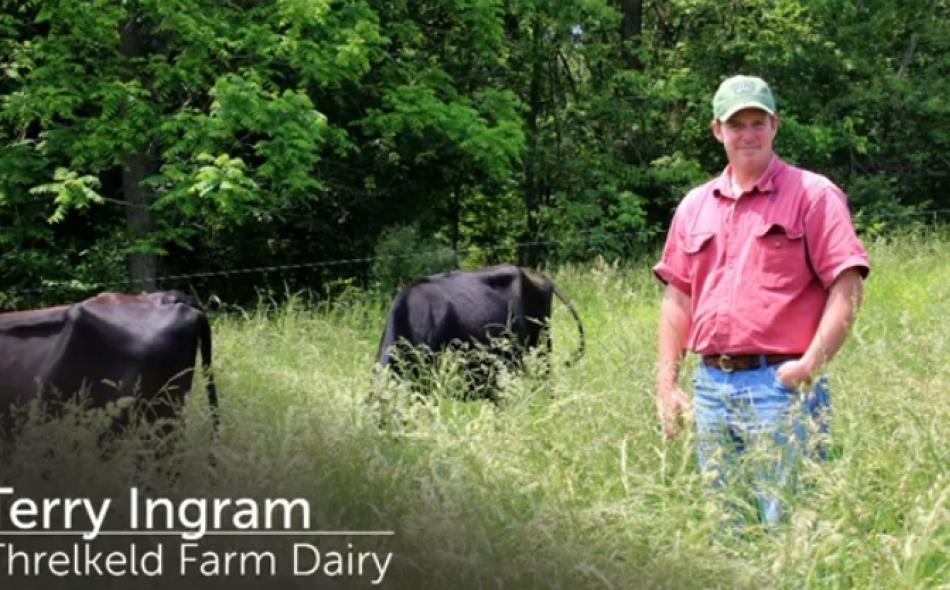 Virginia dairy farmer Terry Ingram is a member of the Organic Valley cooperative.

Update: All five videos are now available at the following links:

Earlier this month, the USDA released its draft climate adaptation plan. The plan recognizes the serious challenges faced by farmers as climate-related weather events, like extreme droughts or floods, wreak havoc on agriculture. The agency is accepting comments through April. The good news is that many farmers are already ahead of the curve in building resilient farming systems to face climate change.

This week, in the lead up to the MOSES Organic Farming conference, IATP will be releasing a series of new videos that look at individual farmers and how sustainable practices on the farm help them stay resilient to a changing climate and increasingly common hurdles like the 2012 drought.

Each day this week, we’ll release a new video digging into things like crop insurance, the Farm Bill, extreme weather and agricultural diversity all through the lens of individual producers that have found their own approach to dealing with the risks farmers face each season.

First up, organic dairy production and risk: Volatile milk prices can make affording feed and other inputs difficult, especially with extreme weather events making those inputs even more expensive. By relying solely on grass to feed his dairy cows, Virginia farmer Terry Ingram of the Organic Valley cooperative has been able to remain financially stable while reducing his reliance on fossil fuel–based inputs, relying instead on the sun.

As narrator and video producer Julia Olmstead puts it:

It may sound simplistic, but in fact the idea of fueling a farm’s engine with the sun, instead of with fossil fuel–based inputs, is powerful when it comes to resiliency and financial stability. Fertilizer costs have been rising steadily for decades. They make up the bulk of hay production costs.

Pesticides, most of which are eliminated in organic farming, make up the next largest share of hay costs. When you put together lower production costs and the higher milk prices the organics premium market generates, it makes farming a sounder prospect, especially for young farmers.

Watch the video and stay tuned all week for the rest of the series.