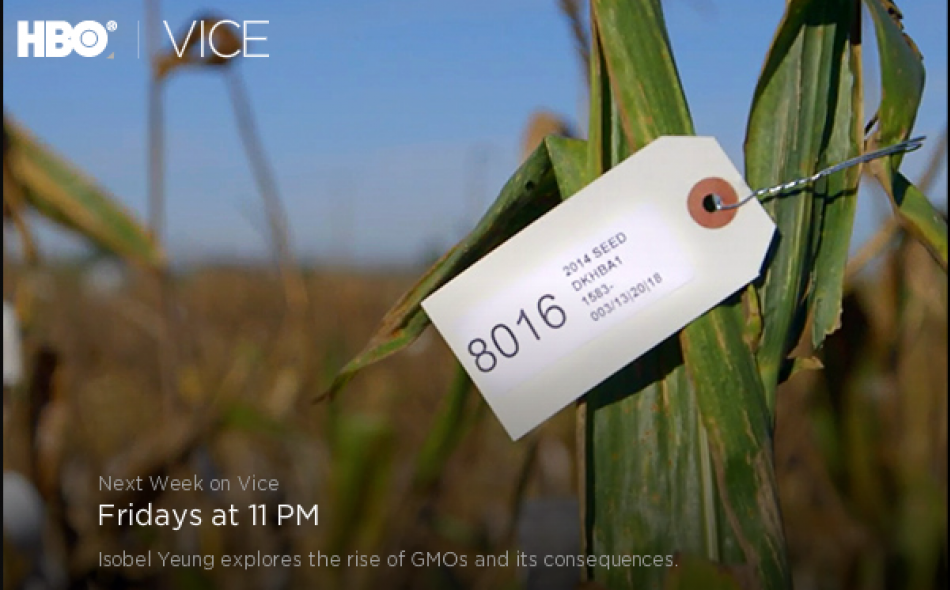 Coming up May 8, HBO will air another episode of Vice, the Emmy-winning documentary series coming out of the Vice Media group. Already this season, Vice has addressed topics from the challenges facing us due to growing antibiotic resistance, to how much of the $10 billion in reconstruction and relief aid sent to Haiti after the 2010 earthquake has actually reached and helped Haitian communities.

The May 8 episode will focus on the future of our food system, in particular, the role of GMOs in helping us achieve a sustainable and food-secure future. Vice interviewed IATP's Director of Agroecology and Agriculture Policy, Dr. Jahi Chappell, to respond to the claims they heard directly from Monsanto about how useful, necessary, and safe GMO crops are. Dr. Chappell's arguments follow:

Genetically modified food is the wrong answer to the wrong question

Although recent pieces in the popular media and press have dismissed critics of GMOs as being anti-science or ideological, many credentialed scientists, myself included, argue that the “GMO = Science” line is incorrect. I would point to three reasons why:

So given that GMOs are, in fact, different than the breeding we have traditionally done, that they do not necessarily help farmers or the environment and that we actually don’t need them to nourish the world, what should we do?

Agroecology For the Win

Besides the very important point to be made about the importance of gender—increasing women’s education and political equality will help decrease population growth while improving food security and nutrition, not to mention improving women's livelihoods directly—the other thing we can do, and indeed many people are already doing, is agroecology. As seen in recent pieces in the popular press awareness of agroecology and its benefits are starting to be talked about beyond the academics, agronomists and farmers who study and practice it.

By focusing on support and collaboration with the world's farmers, and using existing natural processes and innovative ecologically-based practices, agroecology offers the most sustainable way to go about providing for the people of the planet without irreparably damaging our environment through climate change, pollution, toxic chemicals and loss of biodiversity. Consider this: 43% of the reduction in malnutrition over the past 40 years has been tied to increases in equality for women and girls, and increases in dietary diversity. (This is more than twice the contribution by increases in productivity/food availability.) Agroecology, when done right, includes acknowledging and addressing issues of social equity and developing systems supporting autonomy and dignity for farmers across lines of class, creed, caste, and gender. It also leads to more diverse diets, as a key element of agroecology is supporting biodiversity on- and off-farm—including diversity in what you grow, and therefore, can eat.

The upcoming TPP and TTIP trade deals in the U.S.—and the “Fast Track” legislation that would allow President Obama to basically continue to write the deals in secret, with help from corporate observers—are poised to exacerbate the flaws of the GMO model. As IATP Vice President Ben Lilliston wrote last year: “The secrecy of the U.S.-EU trade negotiations, combined with the insider power of agribusiness and biotech companies, is a potentially toxic combination.” The threats posed by this secrecy continue unabated, including the potential to pre-emptively shut down domestic attempts to label GMOs, not to mention the retaliation the U.S. government has considered against EU countries who don’t accept GM foods, as previously revealed by Wikileaks. The U.S. government wants to push back on the EU’s rational approach to GM foods based on the “precautionary principle” (i.e., “the burden of proof on the safety of an unnecessary product or technology is on the people who want to use it, not on the people who want to avoid it”). This is just one of many anti-democratic ideas lurking in these two trade deals—and GMOs are just one place where the deals could lock in corporate interests and ignore the interests and needs of farmers, everyday citizens and our democratic processes.

“No thank you” to a currently unnecessary new technology

Agricultural biotechnology is still a young area, and GMOs are a new-to-the-world technology. This means we cannot be fully sure of their effects—science can work only so fast and evidence can be slow to accumulate, especially when the effects are subtle or take years to appear. Further, the general public and independent (non-corporate) researchers have not been part of the decisions on risks and rewards, consolidated corporate interests have been.

The benefits of GMOs have not been clear, but some of their negative effects—particularly creating “superweeds”, encouraging increased pesticide use overall and putting farmers on treadmills of debt and technology where they have to take out loans to keep buying the newest thing in order to just keep pace—have become clear.

And we know that alternatives—such as the science, practice and social movements of agroecology—can do just as much or more to address the fundamental levers of food security: enhanced equality for women, dietary diversity and yes, agricultural yields. Let's hope that Friday's episode of Vice will help get across the evidence-based message that we don't need GMOs, many people don't want GMOs and in fact, with proper support for farmers and agroecology, we can do even better without them.

Dr. Chappell holds a PhD in Ecology and Evolutionary Biology and a Bachelor’s in Chemical Engineering from the University of Michigan, and has experience as a postdoctoral researcher in Science and Technology Studies at Cornell University and as a professor of Environmental Science and Justice at Washington State University.

See talks from a wide variety of perspectives at the National Academy of Sciences study site: “A science-based look at Genetically Engineered crops”, recordings on the Past Events page: http://nas-sites.org/ge-crops/category/pastevents/

“The Time Has Come for Agroecology” http://www.ipsnews.net/2014/09/the-time-has-come-for-agroecology/

“Key FDA Documents Revealing Hazards Of Genetically Engineered Foods—And Flaws With How The Agency Made Its Policy“ : http://www.biointegrity.org/FDAdocs/04/view1.html

“Getting Past Scientized Scrutiny”, by Montenegro de Wit and Iles, http://www.earthisland.org/journal/index.php/elist/eListRead/getting_past_scientized_scrutiny/