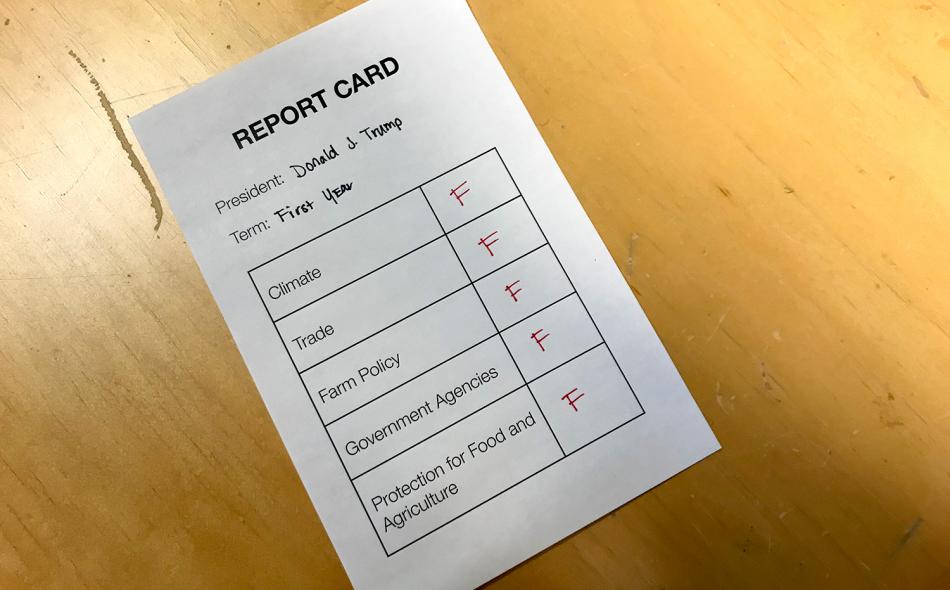 The difficult business of assessing damage in the midst of a heavy storm is worth the effort if findings might offer some protection against further harm, provide insight about what to expect next, and help bind a community together to rebuild.

This is why IATP presents a mid-storm assessment of damage wrought in the first year of Donald Trump’s presidency and the 115th Congress, including thoughts about what we might expect next and what we can and must do about it. In five articles, we offer a critical assessment of the impact of gale-force political winds on agriculture and trade, farmers and rural communities. We consider the storm’s impacts on food system workers, the environment, food safety, and food security. And we describe how the actions of the Trump Administration and Congress have, in one year, established a pattern of cynical disregard for rural communities, hostility toward science, and an unbridled scorn for the principles and practice of democratic governance.

Farmers, farm and food system workers, and the rural communities in which they live rely heavily on an implied understanding of the need to cooperate for the common good, to establish sets of formal and informal rules in the public interest, and to enforce those rules through accountable governance. Rural communities are, by their very nature, particularly vulnerable to the erosion of this social contract. For a start, without it, brilliant rural co-operative inventions, be they institutional or cultural, can no longer support livelihoods, feed families, generate energy, provide healthcare, or guarantee basic education. The common good, the public good, falls apart.

Our research finds that the practices and policies generated by the Trump administration and the 115th Congress are quickening the erosion of the social contract and are doing so with rigorous intentionality. Examples abound.

And all of this plays against the context of a president who expresses support for white supremacy and nationalism, sexual harassment, and xenophobia—undermining efforts to work toward the common good in rural communities and elsewhere.

The news is heavy, and we cannot and should not pretend otherwise.

There are, however, bits of light, generated in rural cooperatives, in local markets and food programs, in early learning centers, in churches and community centers, in urban gardens, among human rights organizations and workers unions. States and municipal governments are working hard to address climate change and rural community members are coming together around climate change too. The NAFTA renegotiation has rekindled a tri-national network of citizens organizations dedicated to a fair agreement that benefits the people of all three countries; and there is a vibrant global civil society movement for peace, justice, and equality. As part of that movement, IATP will work in solidarity to weather the storm and rebuild something better on the other side.