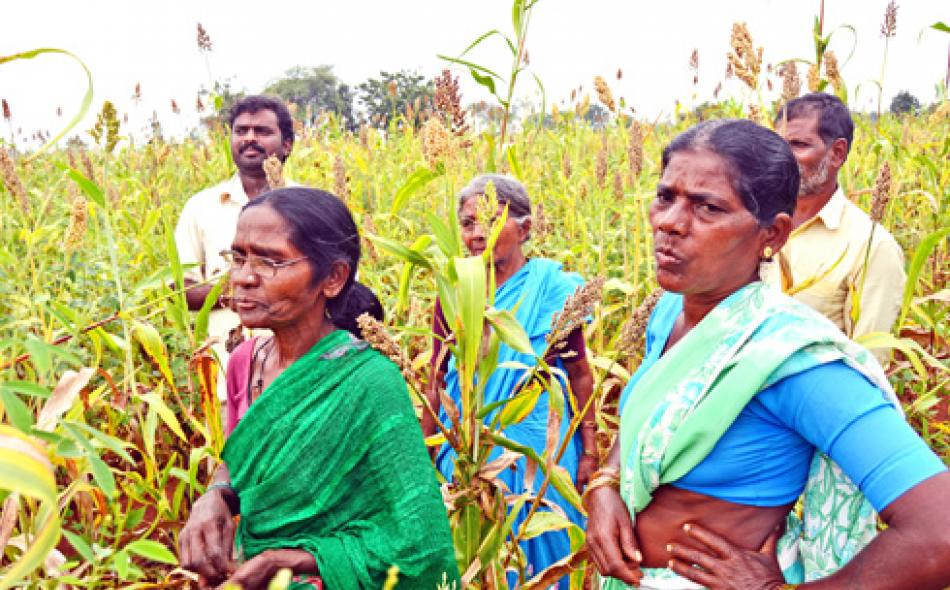 Farmers of Deccan Development Society, Andhra in a biodiverse field.

When it comes to climate change, money can’t solve everything, but it can help. The Green Climate Fund (GCF) is one of the most promising new vehicles to finance climate initiatives in developing countries already particularly hard hit by extreme weather. The GCF is gearing up to announce its initial round of approved projects prior to the global climate talks in Paris this December. But the GCF’s success, and whether it can break from past failures of other multilateral banks, will depend not only on the amount of money it’s able to raise from donor countries but also on the type of projects it supports.

A new report by the Institute for Policy Studies and Friends of the Earth U.S. provides a roadmap for future GCF funding. The report, with contributions from many organizations including IATP, highlights 22 energy and agricultural projects from developing countries in Africa, Asia and Latin America.

IATP helped to feature agroecology projects in Mexico, India, Malawi and Tanzania. The Deccan Development Society in India works in 75 villages with 5,000 women members on building greater autonomy in food production, successfully converting over 10,000 acres of degraded agricultural land into active cultivation. The Soil, Food and Health Communities project in Malawi focuses on agroecology and farmer-led research to improve food security, soil fertility and child nutrition. The National Association of Rural Commercialization Enterprises (ANEC) works with 10 regional networks of small and medium-sized farmers of basic grains to build a new model that is climate-resilient, profitable, grounded in gender and generational equity, and is peasant-driven. And the Chololo EcoVillage in Tanzania works with communities on climate adaptation innovations in agriculture, livestock, water, energy and forestry.

What makes the report a must-read for the GCF is not only the projects featured but the common characteristics that contributed to these initiatives’ success:

These characteristics are consistent with many of the pillars and principles of agroecology outlined in the landmark Nyeleni Declaration earlier this year. The profile of agroecology is rising. The UN Food and Agriculture Organization (FAO) hosted an international symposium on agroecology last year and is holding a series of three regional meetings (including one last month in Brazil) this year. A growing number of scientists have come out in support of agroecology’s ability to “produce food in ecologically sustainable and socially just ways.”

The Green Climate Fund appears on the surface to be a good match for supporting agroecology in developing countries. The Fund is meant to be innovative, and to support country-driven responses that result in a paradigm shift toward low-emission, highly adaptive systems. GCF projects should also provide broad environmental and social benefits–including a gender-sensitive approach. At least 50 percent of the GCF’s projects must focus on climate adaptation–what is most needed by developing countries.

Yet, there are concerns about the GCF. Last month, the GCF approved Deutsche Bank as an accredited entity to channel GCF funds into programs and projects in developing countries. Friends of the Earth’s Karen Orenstein and Action Aid’s Brandon Wu point out that Deutsche Bank has a dark history as a top coal financier and recent legal issues around money laundering and tax evasion. It’s still an open question whether the GCF will repeat the mistakes of the World Bank and other multilateral banks by catering to the needs of wealthy countries and corporate interests.

Thus far, more than $10 billion has been pledged to the GCF by 36 countries. More than 120 project ideas have been submitted and the GCF hopes to approve an initial round of projects worth $500 million before the Paris meeting in December.

The Obama Administration has committed $3 billion to the GCF, including a first installment of $500 million in its 2016 budget proposal making its way through Congress. The House of Representatives has attempted to block  the proposed GCF funding. The Senate has shown more support. The future of the Obama Administration’s proposed GCF funding will be tied to much bigger, long-term funding battles in Congress which could extend into the holidays.

In the coming months, we’ll learn a lot more about the future of the GCF and whether it will support a paradigm shift toward agroecology that is so badly needed to address our climate challenge.