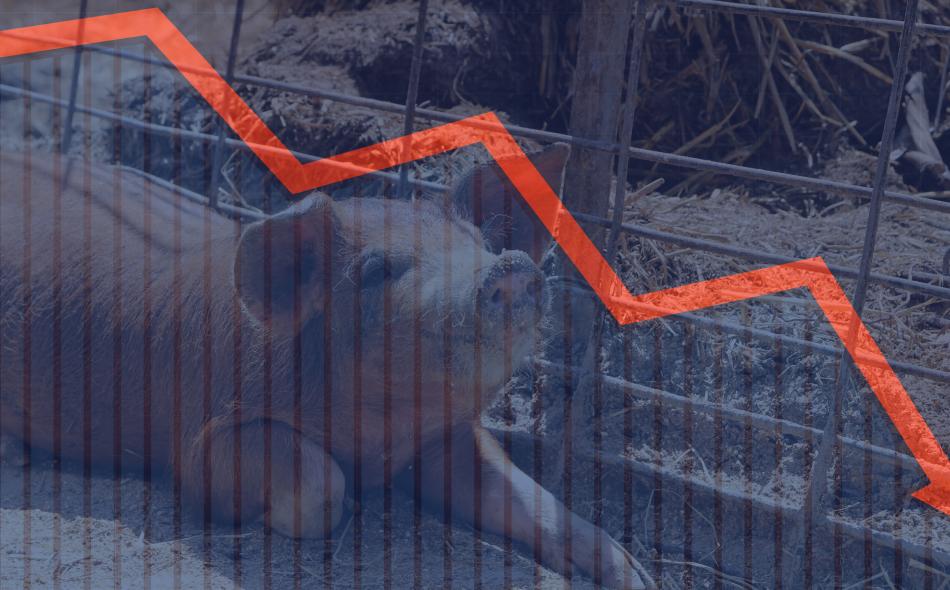 The extent of interconnectedness between farmers and the financial system and between agricultural commodity prices and financial risk management tools, such as futures and options contracts, has increased both in degree and kind over the last thirty years. By 1991, the author of “The Manipulation of Commodity Prices — The Unprosecutable Crime” had written that “The growth of commodity futures contracts in the last thirty years has been explosive.”1 However, it was not just that so many more contracts were being traded but that transactions of futures contracts based on interest rates and foreign currency exchange rates had greatly exceeded those of contracts based on the value of agricultural commodities.

The consequences of a larger but poorly regulated financial system exploded public awareness during the 2007-2009 financial industry insolvencies. The largest banks were bailed out by $29 trillion in Federal Reserve Bank emergency loans,2 but the banks’ reckless practices cost the remainder of the U.S. economy not bailed out $20 trillion “and counting” according to a Better Markets report.3 Among those practices was excessive speculation in physical commodity contracts that created a “boom and bust” in prices, whose mechanisms are described in detail below.4

Standardized data on the interconnectedness between agricultural commodity contracts and financial commodity (e.g., interest rate, exchange rate) contracts is lacking. There is nothing in the Historical Highlights of the USDA agricultural census, 1987 to 2017, to describe changes in the relationship of agriculture to the financial system since the farm mortgage crisis of the 1980s.5 The “financial innovations” of 1987, when Crisis by Design was published, were the stock market index futures derived from the value of stocks in the Standard & Poor’s 500 index and other indices.6 But unless you were a farmer with corporate stock shares or a member of a cooperative that played the futures markets, in 1987 your exposure to the financial system was largely confined to mortgage interest rates and farmland valuations that served as collateral for loans from your banker.

Today the interconnectedness of the financial and agricultural markets is pervasive. The United Nations Conference on Trade and Development uses an umbrella term to describe this interconnectedness for non-agricultural, as well as agricultural, commodities. “Financialization” refers to both the deregulation of the financial services sector beginning the late 1980s and the increasing dominance of “self-regulated” or unregulated financial actors and instruments in the operations of formerly non-finance dominant firms.7

For example, in financialization, a company publicly known for producing meat, such as JBS, makes more money speculating on the value of foreign exchange contracts, ostensibly related to its commodity trading, than it does by producing and commercializing commodities.8 In financialization, the actors, motives, contracts, trading technologies and even the trading venues change the role of financial services in relation to other economic sectors. For agricultural and other physical commodities, the historic financial services role of assisting the price risk management of commercial entities trading in commodity derivatives markets, such as the Chicago Board of Trade (CBOT), changes to dominating the trading of physical commodity contracts as part of financial portfolio diversification for institutional clients, such as pension funds. The shift from commercial hedger dominance to financial entity dominance is illustrated in the Better Markets tabulated charts above for 1995-2014 CBOT corn contracts.9 The charts report the percentage of corn contracts traded by commercial users and traders of corn. The Better Markets analysis does not explain the reduction from nearly 80% in 1999 to about 40% of commercial user and trader reported trades in 2010.

However, a nearly certain factor in the financial entity dominance of the CBOT corn contract is the conversion in 2000 of the CBOT (and exchanges around the world) from being a nonprofit public utility to a for-profit corporation (termed “demutualization”) seeking to maximize trade volume and trading fees in hyper-speed electronic transactions and trade data reporting.10 Another symbiotic factor in the dominance of financial speculators over commercial hedgers in physical commodity contracts was the Commodity Futures Modernization Act of 2000, which enabled legally limitless transactions by financial actors on the for-profit maximization exchanges.11

When Crisis by Design was published in 1987, regulated derivatives instruments were agricultural futures and options contracts, largely used by traders and processors to manage raw materials price risks, e.g., the grain cost of breakfast cereals. Those complex but practical financial instruments have been dwarfed by speculative financial trading greatly exceeding the price hedging needs of traders and processors. By 2012, agricultural contracts were an infinitesimal fraction of financial futures commodity contract transactions, both in number and value.12 When agricultural contracts are bundled with non-agricultural contracts into commodity index funds contracts, the fund formula, rather than supply and demand fundamentals, drive prices.

Another factor affecting agricultural prices are Automated Trading Systems (ATS), computer trading algorithms responding to other algorithms, that transact 99% plus of financial commodity contracts and almost 70% of agricultural contracts.13 Orthodox theory understands “liquidity” to refer to the volume of capital that enables transactions. What IATP has called ATS “phantom liquidity”,14 i.e., contracts that appear and disappear on trading screens too quickly for commercial hedger use, creates a series of micro-shocks to price formation that can induce price volatility and favors those with trading venue access via hyper-speed computing power.

Relentless financial industry pressure has severely undermined the CFTC’s ability to regulate these markets. The CFTC depends on Congress for the resources to monitor trading data for possible cases of market manipulation and excessive speculation. Nowhere near adequate levels of resources have been provided, even as the number and complexity of the contracts under CFTC authority has increased exponentially. Proposals to Congress to make the CFTC a self-financed agency, like all other financial regulatory agencies, have failed.15 As a result, CFTC enforcement depends on market participant self-reporting of rule violations,16 which elicits enforcement actions, but is directed mostly at relatively small-scale traders.

The CFTC delegates to the exchanges the authority to ensure that market participants do not hold contract positions in excess of their hedging requirements.17 Effective exchange monitoring of excessive contract positions was weakened in 2000, when the three major nonprofit trading venues, the Chicago Mercantile Exchange, the CBOT and the New York Mercantile Exchange, converted into for-profit shareholder corporations.18 They had a duty to shareholders to maximize transactions and trading fees, rather than monitor positions in the public interest.

The failure of exchange self-regulation to effectively monitor position limits and prevent excessive speculation was a major factor in what a Better Markets report called the 2005-2010 commodities “boom and bust.”19 Commodity index funds, such as those of Goldman Sachs/Standard and Poor’s, packaged agricultural futures contracts together with those of energy and metals contracts to which position limits did not apply. Pension funds, endowments and mutual funds bought the index products, not to hedge commodity price risks, but to “bet long” to increase prices, regardless of market supply demand fundamentals analyzed by commercial hedgers and traditional non-index speculators.

The Dodd Frank Act of 2010 authorized the CFTC to set position limits, not just for more agricultural contracts than the eight authorized by the Commodity Exchange Act, but also for metals and energy contracts. However, a successful Wall Street lawsuit in 201220 forced the CFTC to both re-propose the rule, review thousands of industry comments and provide a new cost-benefit analysis. By November 2013, when the rule was re-proposed to take into account dozens of Wall Street proposed loopholes, the CFTC had received 23,000 regulatory comments.21 Wall Street and the exchanges continued to oppose any significant limits on derivatives trading.22

When futures contract prices fail to provide reliable benchmark prices for grain elevators, the elevators may cease to allow farmers to forward contract their grain and oilseed production before harvest.23 Without forward contracting, farmers may lack the capital required for their operations and even living expenses.

U.S. commodity market contracts are globally influential in no small part because they are traded in exchanges in dozens of countries. Many developing country governments use these global derivatives prices as reference prices for their agriculture policy.24 If these derivatives prices are distorted by excessive speculation, policies based on the reference prices may be distorted too.

Price shocks and volatility are what financialization actors seek to manage to their own benefit and that of their clients. Most public focus on ATS and algorithmic trading has concerned price volatility and loss of risk management capacity in the stock markets.25 The exchanges must report open contract positions (bidders have not found sellers) at the end of the trading day. Because most ATS commodity trading strategies are designed to close out trading positions before the end of the day, it is very difficult for the agency to assess if excessive speculation in one or more contracts is occurring. The study of intraday price volatility and price disruption in commodities recently undertaken by academics and by the CFTC26 should become a basis for robust rulemaking.

IATP has urged the CFTC to study the impact of market events with uncertain price effects, e.g., the impact of African Swine Fever on lean hog futures prices, and ATS price risk management capacity of such events.27 As extreme weather events exacerbated by climate change increase in severity and prevalence, the impact of those events on agriculture commodity prices and price risk management capacity will challenge the risk management capacity of all actors in the commodity supply chains, including the CFTC and other commodity derivatives regulators.28 If regulators persist in allowing the purveyors of ATS to regulate themselves, they may soon find themselves in the position of regulators and legislators who allowed the Big Tech giants to self-regulate and now struggle to understand how these giants are disrupting economies and even democracies.